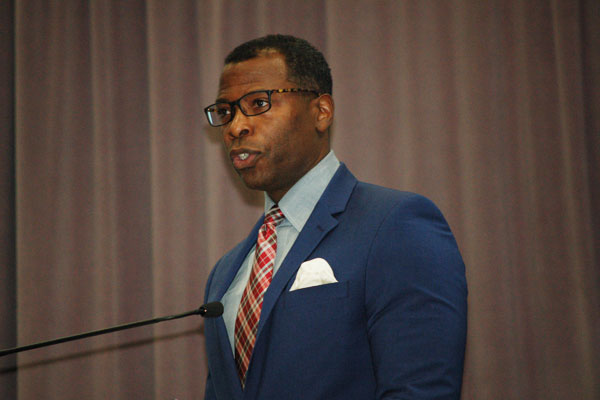 Concern for the welfare of the national parks system in the United States was a priority theme in a presentation by a top US tourism official during the recent IPW conference and travel trade mart.

Elliott L. Ferguson II (pictured), the national chair of the U.S. Travel Association, said the national parks welcomed 318 million visitors last year – more than a third of which were from abroad – but “the truth is, many of these treasures are falling into disrepair.”

“The National Park Service is facing almost $12 billion in deferred maintenance repairs,” said Ferguson, speaking at this year’s IPW in Anaheim. “And if we don’t do something to address these needs, communities that rely on park visitation stand to lose millions of dollars for their local economies – and the parks themselves risk falling into further disrepair.”

Ferguson voiced his support for two bills under consideration in Congress that will establish a dedicated source of funding for the national parks and preserve their viability for future generations. “We are hopeful they will continue to move through Congress and will be enacted into law.”

Ferguson also voiced dismay with reductions in the number of international travellers who are entering the United States, given border slowdowns and delays in visa processing procedures. “Travellers to the US from all over the world can be discouraged if they encounter lengthy visa wait times,” said Ferguson.

That echoed a theme that was expressed by Roger Dow, president and CEO of the U.S. Travel Association, who preceded Ferguson on the podium at the IPW.

“We have also heard that wait times for visas have started to get longer again, especially in important markets such as China,” said Dow. But he said that the U.S. Travel Association is working to spur government action to reduce wait times.