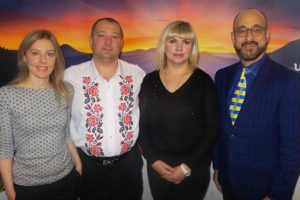 Ukraine International Airlines (UIA) will become the only carrier directly linking Canada and Ukraine beginning next summer, with plans calling for an initial three weekly flights which the carrier hopes to later increase.

The airline’s non-stop service to Ukraine’s capital of Kiev from Toronto will begin June 6 with tickets available through GPSs and FlyUIA.com.

“Our goal is to connect Canada and Ukraine,” GreGG Truman, the airline’s North American general manager, said during a Friday (Dec. 15) presentation in Toronto.

The airline wants to tap into the Ukrainian community in this country, but also carry tourists.

Truman said only 6% of Europe’s largest country in terms of terrain are problem areas now, and those areas can’t be entered by tourists visiting his airline’s homeland.

The remaining 94% of Ukraine is “amazingly safe,” said New York-based Truman, who regularly visits Ukraine and reports walking around Kiev late at night without any concerns.

Truman notes his 25-year-old airline airline – which flies to 35 countries – also works with WestJet and those wanting to travel to Kiev can travel with WestJet to London and then continue with Ukraine International Airlines for the rest of their journey.

Meanwhile, Maryna Radova of the Tourism and Resorts Department of Ukraine’s Ministry of Economic Development and Trade told the gathering her four-seasons destination has “all the types of tourism,” including religious and eco-tourism, with Ukraine having many national parks and other refuges.

The country has seven UNESCO World Heritage Sites, and is also home to Europe’s only desert, she added.

Radova also said that tourists needn’t be nervous about visiting her homeland.

“We are safe for tourism. That’s why we’re here.”