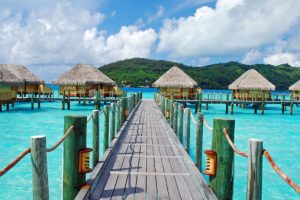 Paradise on tap… United Airlines (UAL) has announced plans to begin service between San Francisco and Pape’ete, Tahiti, the South Pacific’s gateway to more than 118 islands in French Polynesia including Bora Bora, Moorea, the Marquesas and Raiatea.

United is the only US carrier offering nonstop service to Tahiti from the mainland United States. Tickets are now available for purchase.

“We are excited to announce Tahiti as our 13th new international route this year, and we are even more thrilled about offering our customers a whole new world of vacation opportunities,” said Patrick Quayle, United’s vice-president of International Network. “We know our customers want more destinations to choose from to escape the winter weather, and we look forward to being the airline that connects them to this corner of paradise.”