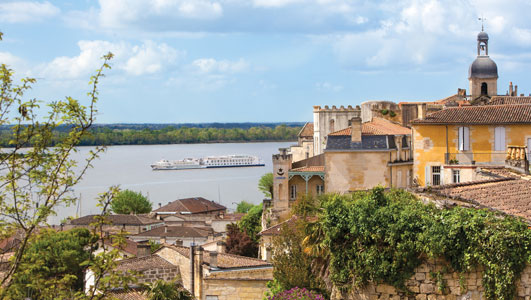 The River Royale will be going out of service on Oct. 28 and will undergo an extensive transformation to become the S.S. Bon Voyage, resuming service on the Dordogne and Garonne rivers as Uniworld’s sixth Super Ship on April 14, 2019. Bon Voyage is the second ship in the line to be upgraded to a Super Ship, following the S.S. Beatrice, which joined the award-winning fleet of floating boutique hotels as a Super Ship this past April.

Inspired by the renowned wine and gastronomic expertise of the region, the Bon Voyage will represent “the bountiful destination – from the beautiful design on the ship’s bow to the enhanced culinary opportunities onboard.”

Food and beverage, “a consistently high priority for the line,” says Ellen Bettridge, president and CEO of Uniworld, is at the forefront of the ship’s re-imagination with the introduction of two new onboard dining venues – the space formally known as the Blue Fox Café will be converted into a casual dining venue that opens up on to the new pool and serves lighter fare with a local spin, such as ham and cheese baguettes, Niçoise salads and pizzas directly from its pizza oven – well suited for daytime poolside dining. In the evening, this space will become an alternate bar location and will also be used for immersive culinary experiences, including intimate French cooking classes with the chef. A bistro inspired by Bouillon Pigalle in Paris will be added at the bow of the ship, offering guests shared plates at dinner, reflective of the local cuisine onshore – from Beef Bourguignon to rich pâtés and escargot.

Other enhancements include a new buffet in the ship’s main dining room with chef demonstration area, and an enhanced Claret’s, the ship’s private dining and wine tasting room adjacent to the main restaurant, will be preserved for special events such as Captain’s Table dining or VIP wine tasting.

One of Uniworld’s most intimate ships, Bon Voyage will add four new luxury suites, and will increase its staff to guest ratio when the ship goes from 128 passengers to 124 and adds more staff. Other improvements include an upgrade to all bathrooms from tile to marble; reconfiguration of the gym and spa facilities; and a re-imagined top deck with a new outdoor swimming pool, outdoor lounge and banquette seating all along the edges with lighting designed to enhance the space in the evening.