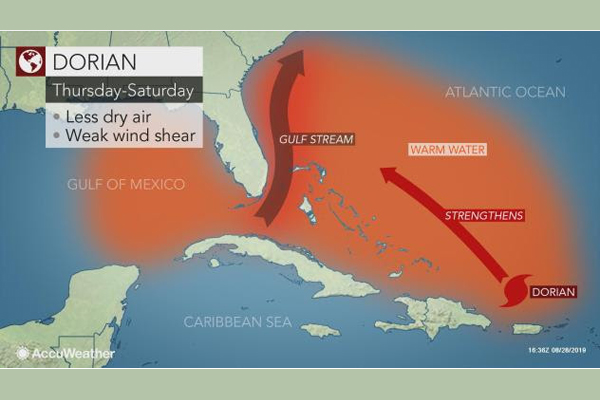 As Dorian spun into the warm, open waters of the Atlantic today (Aug. 29), concerns grew about the storm’s projected path towards the United States, where it could strike as a major hurricane over the upcoming holiday weekend.

The National Hurricane Center said during an 11 a.m. advisory that the storm was about 220 miles north-northwest of San Juan and 370 miles east-southeast of the Bahamas. The storm, still packing maximum sustained winds of 85 mph, was moving at 13 mph as it entered the open – and warmer – waters of the southern Atlantic.

As Dorian, the second hurricane of the Atlantic season, tracks north of the Bahamas later this week, it is expected to reach Category 4 hurricane strength before approaching the southeastern United States coast.

“The strengthening to a major hurricane is projected to occur while making a more westward turn toward the northern Bahamas this weekend,” according to AccuWeather Senior Meteorologist Alex Sosnowski.

“With Dorian forecast to pass over extremely warm water of the Gulf Stream, where the water is rapidly replaced by more warm water, you have to be concerned that a Category 5 storm is on the table before reaching the US coast,” Sosnowski said.

A Category 5 hurricane has maximum sustained winds of at least 157 mph.

The storm made a shift to the north on Wednesday causing its centre to regenerate northeast of Puerto Rico and putting forecasters on alert for development of the Atlantic’s first major hurricane of the 2019 season.

The hurricane brought waves of heavy rain to Puerto Rico and parts of the U.S. and British Virgin Islands on Wednesday after it battered portions of the Lesser Antilles on Tuesday. While Dorian’s eye wasn’t yet visible on satellite imagery Wednesday afternoon, it was easy to spot in a radar loop showing the storm passing by Puerto Rico.

With several days over the open waters of the Atlantic still to go, the exact track of Dorian for the weekend and beyond is not yet known.