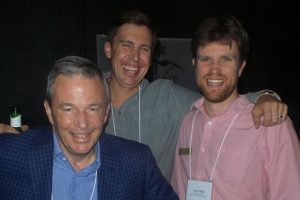 Those in Vermont’s tourism trade say going downhill in their state can be uplifting.

Vermont tourism officials held a Thursday Toronto gathering touting Vermont as a great ski retreat that offers a wide selection of ski resorts, some close enough to the Quebec border that they can be visited on day trips from Montreal.

Mike Chait of Smuggler’s Notch – which bills itself as “America’s Family Resort” – noted that it is 45 minutes from Quebec and “you can see the skyline of Montreal on a clear day” from the hill.

Night owls can ride a chairlift to the summit after dark, have dinner and then snowshoe down the hill, he added.

Chait said Vermont has been a leading jurisdiction when it comes to schussing, among other things having the first ski lift in the United States, creating the first ski patrol in that country and being a pioneer in snowboarding.

John Bleh of Sugarbush in turn noted his hill is independently owned, with a vice-president of investment firm Merrill Lynch having bought the majority of resort shares in 2001.

That owner now takes to Sugarbush slopes around 100 times a year, enabling him to keep a close eye on a resort that features two mountains that are connected by both a chairlift and a shuttle, have 111 trails and offer glade skiing between the mountains, he continued.

Sugarbush is some 2.5 hours from Montreal.

Jamie Storrs of Mount Snow said that resort decided to invest $30 million in new snow-making, a move that gives it the greatest snow-making ability in the northeastern US.

Meanwhile, Blake Olson of Stowe, Vermont’s Trapp Family Lodge said that resort – founded some 50 years ago by the family that became internationally famed following the release of the movie The Sound of Music – has long reached out to cross-country skiers, and now offers 65 miles of groomed cross-country trails. “We’re the most important nordic ski centre not only in North America, but perhaps the Western Hemisphere,” he said.

Pictured are Olson, Storrs and Bleh.