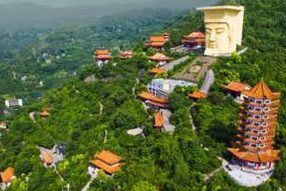 As an alternative to Shibaozhai, where passengers experience an impressive 12-storey wooden pagoda dating back to the 18th century, the only American-managed line on China’s Yangtze will include the Jade Emperor Scenic Area in Fengdu on select departures.

The Jade Emperor is the supreme deity of Chinese Taoism. The sacred scenic area lies on the northern side of Yangtze west of Mingshan Mountain and east of Shuangguishan National Forest. At more than 100 feet tall, it is the largest statue in the world depicting the Jade Emperor and is modeled according to the principles of Feng Shui. The scenic area features more than 30 different styles of traditional architecture and over 208 deity sculptures depicting Taoist and Buddhist culture.

Additionally, Victoria Cruises will debut an excursion to the Hometown of Qu Yuan, a cultural highlight at the foot of Phoenix Mountain with sweeping views of the Three Gorges Dam and surrounding scenery. Qu Yuan is a celebrated poet and statesman who served as chancellor to King Huai of the Kingdom of Chu 23 centuries ago and whose tragic exile and death inspired the Dragon Boat Festival, which is commemorated every May. Passengers will observe hanging coffins, learn about dragon boating and enjoy a performance of Chinese traditional witchcraft during the excursion, which may be featured as an alternative to the Tribe of the Three Gorges excursion, based on river conditions.

Daily departures for both the Three Gorges Highlights and Three Gorges Explorer itineraries will be offered March 15 to Nov. 25, 2018.