Scarlet Lady Will Set Sail Out of Miami in Spring 2020 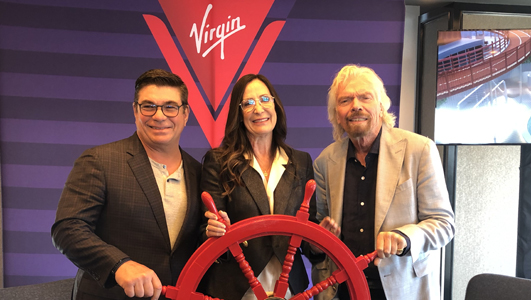 Fresh off attending Monday night’s Toronto Raptor game, which he called exhilarating, Sir Richard Branson and his Virgin Voyages team unveiled exciting cruise news – including the introduction of a Canadian captain – during a press event yesterday (June 11) in Toronto.

Virgin Group founder Branson and Virgin Voyages president and CEO Tom McAlpin announced the appointment of Captain Wendy Williams as Master of Scarlet Lady, Virgin Voyages first ship, which will set sail out of Miami in spring 2020. When Williams takes the helm of Scarlet Lady, she will become the first Canadian woman to be captain of a ship for a major cruise brand.

“Captain Wendy’s extensive maritime background makes her an excellent choice to lead the Scarlet Lady, but it is her spirit and drive to approach life at sea differently that make her the perfect fit to join the Virgin Voyages family,” said McAlpin.

Originally from the coastal city of Sept-Îles, Quebec, Captain Williams now resides on Vancouver Island. She has more than 28 years of experience working on ships at sea. Her extensive background includes more than a decade as a deckhand in commercial fishing off the western coast of Canada as well as working as a ferryboat captain. Although she has spent more than 15 years working on the bridge of mega cruise ships, including with Royal Caribbean, her role with Virgin Voyages will be her first promotion to Master of a cruise ship.

“I have salt water in my veins and nothing brings me more joy than being at sea,” said Williams. “It’s a dream come true to be working with Virgin Voyages, a company that is focused on creating an incredible experience not only for our ‘sailors,’ but for our crew as well; while also taking action to minimize our footprint on our oceans.”

Last year, Virgin Voyages launched its Scarlet Squad program, an initiative dedicated to bridging the gender gap in leadership roles across the maritime industry, where women represent less than 3% of the workforce. The program aims to recruit, support and mentor female shipboard talent, and to grow opportunities for leadership roles in marine, technical and hotel management positions on board.

While Virgin Voyages is still in the early stages of the crew for Scarlet Lady, nearly a dozen female officers have been hired, including Jill Anderson as hotel director, Christin Wenge as safety officer and Lindsay Kerber as environmental officer. 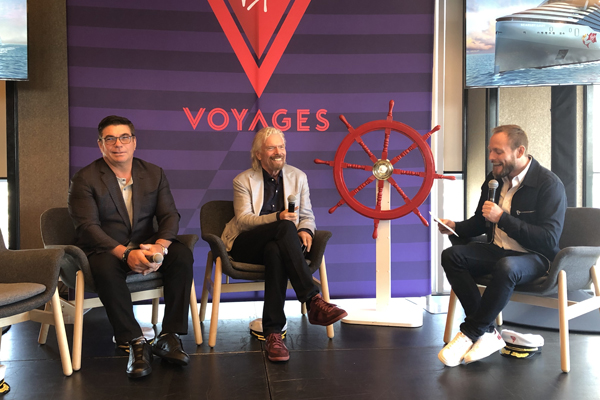 The company also announced a new lineup of itineraries for their premier 2020 season.

In response to the US government’s new restrictions on travel to Cuba from the United States, Virgin has developed a lineup of new itineraries, highlighted by multiple late-night sailaways, including a midnight departure on all new sailings.

For those wanting a quick getaway, Virgin’s four-night sailings will now become “Fire and Sunset Soirées” including a sunset departure from Key West and a midnight departure from Bimini, Bahamas. Guests will experience the cultural and boating paradise of Key West, paired with a day of rejuvenation in Bimini that’s topped off by an exclusive late-night beach bonfire soiree. The celebration under the stars is exclusive to these sailings, and the artistic fire installations draw inspiration from the fireball sculptures on Branson’s Necker Island and the communal nature of a traditional beach-side bonfire.

In response to demand for longer voyages, Virgin Voyages introduced special seven-night sailings for the 2020 festive holiday season. Those looking to get a jump start on their holiday planning can opt for the all-new Holidaze and Nights and New Year’s Ahoy voyages, which fall over the Christmas and New Year’s holidays respectively, and feature stops in Puerto Plata, Dominican Republic and late-night sailaways in both Bimini, Bahamas and San Juan, Puerto Rico.

All voyages feature a stop in Bimini, Bahamas, home to The Beach Club, a private club for Virgin Voyages Sailors while Scarlet Lady is on the island.

Branson described the adults-only Virgin Voyages for “the young at heart.”

“It’s fun for everybody,” he said, adding the 90 “RockStar” suites each have a table that can be danced on.

McAlpin noted that Virgin Voyages is not just another cruise product.

“What we’ve set out to do is create a travel brand,” he said. “It starts with the name and the ship, which is unique, great styling and design. It’s about working closely with the communities we go to. It’s about our oceans, conservation and sustainability.”

The Scarlet Lady was designed to reflect a yacht’s sleek luxury featuring spaces designed by some of the top names in contemporary design. Of the ship’s 1,408 cabins, 93% will have ocean views and 86% will have a balcony.

The ship will feature alluring entertainment and 20-plus intimate eateries (maximum capacity 220). Putting a twist on luxury, which the company refers to as Rebellious Luxe, all restaurants, group fitness classes, soft drinks and more will be included within the voyage fare.

As for travel agents, which McAlpin calls First Mates (the captain’s right hand), Virgin pays 10% commission on everything they sell.

“They’re a huge part of our business,” he said. “We need help to spread the word [about Virgin Voyages].” 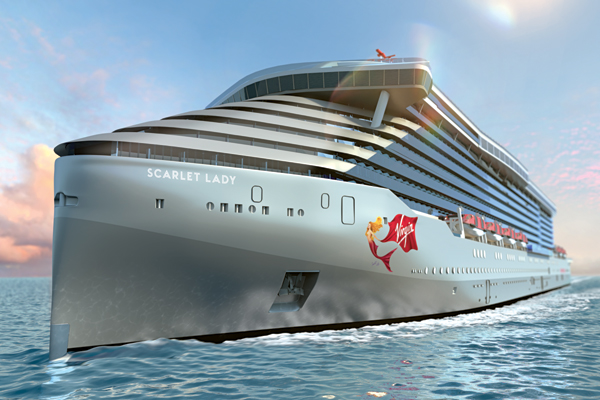