Virgin Voyages Turns Up The Volume 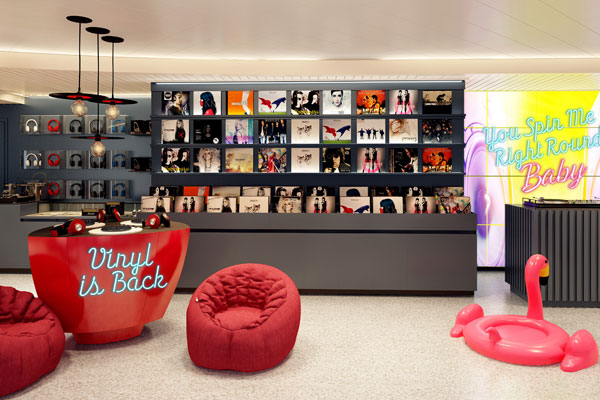 Virgin Voyages is returning to its Virgin brand roots and creating what it is calling “an incomparable music experience” on its first ship, Scarlet Lady.

Due to set sail for its inaugural season in 2020, Scarlet Lady will be equipped with an on ship record shop called Voyage Vinyl, The Groupie, a private karaoke and gaming lounge, and perfectly curated music and performances by up-and-coming artists as well as music trendsetters for Virgin Voyages’ Sailors to enjoy.

Virgin Voyages’ residency program will feature performances by world-class talent on ship, in-port destinations and at The Beach Club at Bimini. Just last month, Virgin announced that the Grammy and Oscar-winning DJ, songwriter and record producer, Mark Ronson, has committed to four performances at The Beach Club at Bimini in 2020. Based on Sailor demand, the company has expanded the star-studded residency music lineup to include the multi-platinum chart-topping artist, DJ, producer/ remixer, MK (Marc Kinchen), who has committed to one performance in 2020. The Grammy-nominated electronic music duo Sofi Tukker, known for their smash-hit Best Friend, will also join the Virgin Voyages residency program.

According to officials, each space on Scarlet Lady will have a unique energy, thoughtfully developed by industry legends and brought to life by up-and-coming talent and special guest performances. The Virgin Voyages sonic identity will have a home in electronic music, but will also incorporate other music genres, ensuring that all guests will find a sound they love.

As part of Virgin Voyages’ fierce approach to music, the brand also announced the expansion of their Creative Collective from design, food and entertainment to now include music, working with some of the most creative and transformative artists in the industry.

Leaning into Virgin’s history in music, something old is new again with Voyage Vinyl, the record shop aboard Scarlet Lady. Voyage Vinyl will be the go-to spot on board to experience music from all eras and genres, highlighted by personal listening stations. Sailors can also purchase music magazines, headphones and record players.