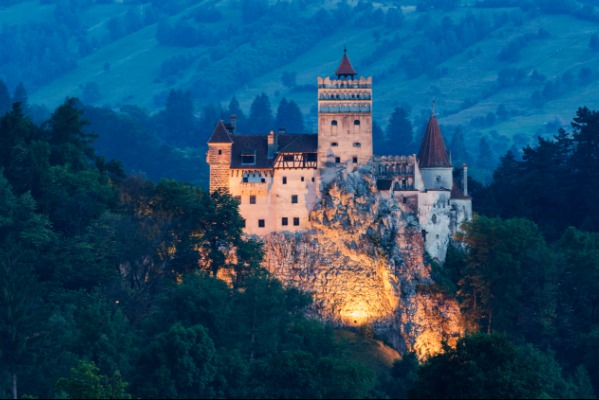 Guests will travel to the forested area of Transylvania to explore the castle’s narrow winding stairways, connecting to over 60 rooms.

This Gothic national landmark is spectacular at night with its soaring towers and turrets, perched atop a 200-foot-high rock surrounded by Romania’s Carpathian Mountains and provides a more intimate setting when the peak daytime crowds have left the premises.

During the private tour of this medieval fortress, which was completed in 1388, Insight’s engaging Local Expert discusses the legends around Count Dracula and the life of Queen Marie of Romania, the granddaughter of England’s Queen Victoria who was the last royal resident of the castle from 1920 to 1938.

Guests may have the opportunity to explore the castle’s secret and underground passages. Clients will have an eerie thrill learning about a secret stairway which leads to a wood-panelled library.

At the end of the tour, guests will head to Queen Marie’s Tea House and enjoy a private 3-course dinner including wine, showcasing the flavours of the region.

This charming place was built in the 1920s, where Queen Marie would receive guests to Bran Castle. She enjoyed hosting afternoon teas surrounded by flowers and greenery. Treasures of the Balkans Itinerary is an 18-day guided tour including Romania, Croatia and Bulgaria.

Guests explore the former Communist headquarters of Romania in Bucharest, see Bulgaria’s Roman ruins in Sofia and marvel at Bosnia’s Tunnel of Hope in Sarajevo.

After exploring the medieval city of Brașov, they take the mountain roads to the Transylvanian border and join a private visit of Bran Castle after hours — better known as Dracula’s haunted abode in Bram Stoker’s infamous novel, followed by private dinner.

They delve into the myths and legends before adventuring onwards to Mostar, where a Local Expert guides them through the city’s iconic sights ahead of a Sarajevo Dine at Home experience.

Participants sit down with a Sarajevan family for a feast of local delicacies, traditional Bosnian coffee and tales of local life before the adventure continues in Hungary. They conclude their voyage with the spectacular city vistas served up from the Budapest Fisherman’s Bastion.