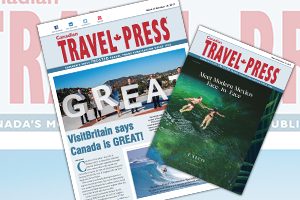 Canada is set to play a key role in Britain’s drive to spread the inbound tourism load more equitably throughout a nation where the capital city currently accounts for 53% of all inbound spend; leaving 35% for the rest of England, 8% for Scotland and 2% for Wales, reports Quebec editor, Mike Dunbar in this week’s digital edition of Canadian Travel Press.

This country is already playing its part as a top-ten tourist provider but, more importantly, as a market that bucks the London-centric trend and is more likely than most to explore what the rest of the British Isles has to offer.

At the recent Destination Britain North America (DBNA) trade fair in Los Angeles, newly-minted VisitBritain executive VP for the Americas Gavin Landry told CTP, “Dispersal and incremental visitation are two of our highest priorities and our special relationship with Canada is helping us achieve those goals.”

He explained that this is a market with “a large understanding” of the destination and a propensity to explore it in depth.

“Canadians are apt to rent a car or jump on a train, which has resulted in 66% of total nights being spent outside London,” Landry noted.

Last year Britain counted 828,000 Canadian arrivals, meaning that one-in-45 of us crossed the pond to the UK, compared with one-in-95 Americans. This year Canadian arrivals have been “clicking ahead at plus-22%,” he revealed.

Prior to joining VisitBritain Landry was executive director of Tourism of New York State where he spearheaded the iconic I LOVE NEW YORK campaign which garnered record results for the entire state and not just New York City.

“We can use the same tactics to highlight London-plus,” said Landry.

The relative strength of the dollar versus the pound has played a part in the ongoing tourism success Britain is enjoying and he pointed out, “We have had a great value proposition for the past couple of years, currently and going forward.”

Carol Dray, VisitBritain’s commercial director, echoed Landry’s dispersal comments, stating, “Our objectives are all about incrementality; that is, bringing new visitors to Great Britain, getting them to stay longer and spend more.”