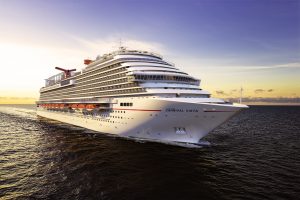 PortMiami welcomed Carnival Cruise Line’s newest, largest and most innovative ship, Carnival Vista, Sunday (Nov. 27) when it arrived to kick off a year-round schedule of six- and eight-day cruises to the Caribbean.

Stefano Battinelli and PortMiami Assistant Director Fred Wong participated in a traditional maritime plaque exchange prior to the ship’s inaugural departure from Miami.

Carnival Vista kicked off its new schedule with a special six-day cruise to Grand Turk, Ocho Rios and Nassau. The ship will then launch a year-round schedule of six- and eight-day cruises beginning with an eight-day voyage departing Dec. 3.

The ship will also offer a combination of one-time voyages, including a five-day cruise departing Dec. 11 and seven-day voyages departing Dec. 17 and 24, that offer a selection of ports including the Caribbean’s newest destination, Amber Cove in the Dominican Republic, as well as Mahogany Bay, Grand Turk, Belize, San Juan, St. Thomas and Cozumel, depending on the itinerary.