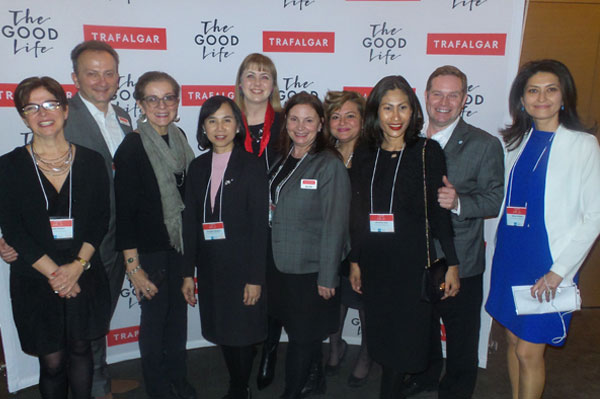 The woman who penned the New York Times bestseller 1,000 Places to See Before You Die is cautioning those with wanderlust not to repeatedly delay travel to their dream locales.

Patricia Schultz told Trafalgar’s A Winter’s Travel Tales gathering that those who do repeatedly put off their dream trips may find the day will come when they’re no longer able to travel.

Schultz has long been a brand ambassador for Trafalgar and told her audience that those who travel with that tour operator are “pretty much guaranteed of having everything taken care of” on their journeys.

Schultz said “there’s no such thing as a bad trip…Every trip offers you something special.”

Trafalgar president Wolf Paunic in turn said “travel is ultimately about the fun” and said his company’s itineraries enable clients to establish connections with locals, providing insights into the countries that they’re visiting.

Among countries Paunic singled out for praise was Turkey, which this year is in particular touting the famed archeological site of Troy, which Paunic noted dates back thousands of years. “Troy awaits you to discover its ancient history.”

Schultz also had kind words for Turkey, labelling Istanbul the “most stunning, beautiful, historical, fascinating city that I’ve ever visited.”

Istanbul is “the only city on this globe that is trans-continental,” she continued.

Turkish tourism authorities were among those taking part in a trade show prior to Paunic’s and Schultz’ talks and provided those on hand with a performance by a whirling dervish.