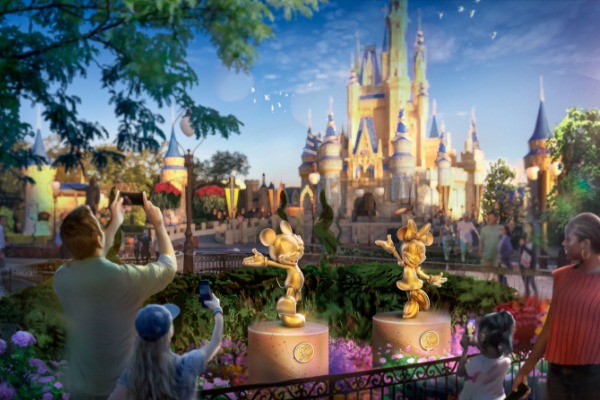 It is hard to believe, but the Walt Disney World Resort in Orlando, Florida is turning 50.

In the five decades since then, the vacation destination continued to expand with new stories and characters and adventures to cherish for a lifetime.

To mark the approaching milestone, guests can share in “The World’s Most Magical Celebration” beginning Oct. 1, 2021, in honour of the resort’s 50th anniversary.

This 18-month celebratory event will feature new experiences at the resort’s four theme parks and beyond, where shimmering EARidescent décor will appear as if by magic.

Shining at the centre of it all will be Cinderella Castle at Magic Kingdom Park, which will add to its royal makeover from 2020 with new gold bunting, sparkling golden embellishments and other new enhancements, including a 50th anniversary crest warmly welcoming guests to the join the festivities.

A new nighttime spectacular, “Disney Enchantment,” will help kick off the 50th anniversary festivities when it debuts Oct. 1 at Magic Kingdom Park. Created to launch with “The World’s Most Magical Celebration,” this evening extravaganza will take guests on a journey filled with adventure, wonder and empowerment.

Inspiring everyone to believe in magic, “Disney Enchantment” will feature music, enhanced lighting, stunning fireworks and, for the first time, immersive projection effects that extend from Cinderella Castle down Main Street, U.S.A.

And joining “Disney Enchantment” on Oct. 1 will be “Harmonious” at EPCOT, one of the largest nighttime spectaculars ever created for a Disney park. This new show will bring the globe together at World Showcase Lagoon and feature new interpretations of classic Disney songs, reimagined in more than a dozen languages by a diverse group of 240 artists from around the world.

The grand opening of Remy’s Ratatouille Adventure will be Oct. 1, inviting guests into the flavorful world of Disney and Pixar’s Academy Award-winning “Ratatouille.”

Also, debuting Oct. 1 in this section of the pavilion will be a new restaurant, La Crêperie de Paris, offering both table- and quick-service options.

As part of “The World’s Most Magical Celebration,” icons at each Walt Disney World theme park will transform into magnificent Beacons of Magic at night, coming to life with their own EARidescent glow.

For more on the Walt Disney World Resort and “The World’s Most Magical Celebration,” go to www.DisneyWorld.com/50 and www.DisneyParksBlog.com or follow #DisneyWorld50 on social media platforms.