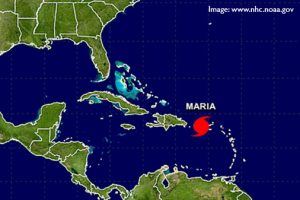 Good News From The DR

Hurricane Maria has moved away from the Dominican Republic, without having had a direct impact on the countrys tourism industry.

Julio Almonte, vice minister of tourism of the Dominican Republics Northern Zone, said: “In the north, the situation is under control despite intermittent rains and moderate winds that have caused some trees to fall, said. We have toured the area and can report that the hotel infrastructure has not suffered any damage and that electricity and water services are working. The roads are operational and Gregorio Luperón Airport was not affected.”

As for the airports of Punta Cana, La Romana and Samana, the Dominican Institute of Civil Aviation (IDAC) ordered the resumption of operations. The flight schedule in the country was expected to return to normal yesterday.

Joel Santos, president of the National Hotel and Tourism Association of the Dominican Republic (ASONAHORES), reported that: “So far, no significant damage is reported in the country’s tourist destinations, said There are cleaning and gardening crews operating to repair some of the things that wind and rain have affected, but fortunately there is nothing that the current protocols and established procedures have not helped us deal with.”

And Ernesto Veloz, president of the Association of Hotels and Tourism Projects of the East (ASOLESTE), said: “The hotel infrastructure of Punta Cana did not suffer considerable damage, with only the usual minor impact you would face with winds and rains of this nature. Hotel services are fully operational. Together with the Special Corps for Tourist Safety (CESTUR), we have travelled the area verifying the state of the highways and roads and the restoration of electricity in affected areas.”

Similarly, Juan Bancalari, president of the Association of Hotels and Tourist Companies of Samana (AHETSA), commented that “Samana does not report major issues and vehicular traffic on the Northeastern Highway and Boulevard del Atlántico is back to normal. The hotel infrastructure in the area did not have significant damage, the electricity was reestablished in one of the areas that had been affected and the flooding on the boardwalk will be solved in the next hours.”

St. Kitts reports that initial assessments have been completed and the island is resuming normal operations, as it was fortunate to escape major damage from the passage of Hurricane Maria to its south on Sept. 19.

All hotels in St. Kitts are fully operational and those properties that do not engage in regular seasonal closures are open and servicing guests.

The Port Zante cruise pier did not sustain damage and St. Kitts is scheduled to welcome two vessels tomorrow – Carnival Cruise Line’s Carnival Fascination and Royal Caribbean’s Adventure of the Seas. Park Hyatt remains on track to debut in November.

According to the latest information, damages have been reported in parts of Puebla, Morelos, and Mexico City. Tourist attractions remain open and functioning in these destinations. While the international airports in Mexico City and Puebla suspended operations as a standard precaution yesterday, both airports reopened within four hours and are now fully operational.

Additionally, no other international tourism destinations in Mexico have been affected and are operating normally. Given these facts, there is no reason for visitors to cancel travel plans to Mexico.

The eye of the Category 5 storm passed south of St. Croix overnight (Tuesday into early Wednesday morning), bringing with it hurricane-force winds, heavy rainfall and flooding. The islands of St. John, St. Thomas and Water Island, which are still recovering from the impact of Hurricane Irma, endured tropical storm conditions.

The Department of Tourism continues to encourage travellers to postpone trips to the islands at this time as it further evaluates the damage caused by the hurricanes and coordinates evacuation efforts.

Communication throughout the Territory is limited, and the Department of Tourism is in the process of collecting information from tourism stakeholders.

To assist with the recovery and reconstruction, visit http://www.usvirecovery.org.

“We’ll be working closely with government agencies and the entire tourism industry to assess its impact on the island,” the statement said. “We’re confident that Puerto Rico will recover.

“Our tourism infrastructure is strong and our people are even stronger. We came together not long ago to help our Caribbean neighbours post-Irma and it’s this generosity, the hospitality of our people, and the beauty of our island that we know will continue to lure millions of travellers like you to come visit us.”
Tourism officials are advising those interested in visiting Puerto Rico to check back the http://puertoriconow.seepuertorico.com site to learn about the recovery.

Many buildings serving as shelters lost roofs, which means that a very urgent need now is tarpaulins and other roofing materials. Little contact has been made with the outer communities but persons who walked 10 and 15 miles towards the city of Roseau from various outer districts report total destruction of homes, some roadways and crops.

Urgent helicopter services are needed to take food, water and tarpaulins to outer districts for shelter.

Canefield airport can accommodate helicopter landings and it is expected that from today, the waters around the main Roseau port will be calm enough to accommodate vessels bringing relief supplies and other forms of assistance.

It’s difficult to determine the level of fatalities, but so far seven are confirmed, as a direct result of the hurricane.

The urgent needs now are roofing materials for shelters, bedding supplies for hundreds stranded in or outside what’s left of their homes and food and water drops for residents of outlying districts inaccessible at the moment.

The tarmac at Mellville Hall [Airport] was not too badly damaged so the strip should be opened in a day or two for larger relief planes to land.

The country is in a daze – no electricity, no running water – as a result of uprooted pipes in most communities and definitely to landline or cellphone services on island, and that will be for quite a while.

In summary,  the island has been devastated. The housing stock significantly damaged or destroyed. All available public buildings are being used as shelters; with very limited roofing materials evident. The country needs the support and continued help and prayers of all.”

As Hurricane Maria moves through the Caribbean, PressToday will be monitoring advisories and updates from destinations, airlines and tour operators and posting the latest information on https://www.travelpress.com.

And we’ll also be watching for updates and information on what’s going on in Mexico following the 7.1 magnitude earthquake that caused massive damage in Mexico City and other areas of the country.

Stay tuned and check in regularly at https://www.travelpress.com for more.