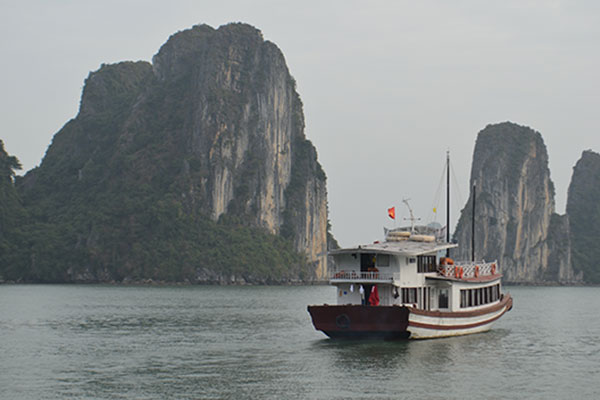 The renowned scenery of Ha Long Bay on the northern coast of Vietnam was the highlight of day one of this year’s edition of the Asean Tourism Forum (ATF), reports Press Today’s Ted Davis who is attending the show.

Tour operators, tourism product buyers and others boarded double-deck day-cruise boats for half-day sailings around Ha Long Bay, to see the dramatic limestone rocks and cliffs that define the scenery. The UNESCO-certified region is Vietnam’s top natural attraction and draws thousands of visitors from around the world.

Adjoining the bay is Ha Long City, which is serving as the site of the 2019 ATF, running until Jan. 18. The small city is in the midst of building boom, as the it seeks to greatly expand its tourism footprint. For instance, sea and road connectivity was vastly improved by the completion of the Ha Long Expressway from Hanoi and the opening of the Hon Gai International Port in Q4 of 2018.

Crucially, air access has also been improved, with the opening of the Van Don International Airport, which is able serve both domestic and international flights. It is located about 50 km. from Ha Long and opened for operations on Dec. 30, 2018 with a flight from Hanoi by Vietnam Airlines.

Despite this expansion, Ha Long City and Ha Long Bay still meet the definition of a “secondary” destination, in that they are not primary destinations like Hanoi and Ho Chi Minh City. And that satisfies a growing demand to develop more of these smaller destinations, to help relieve the pressure of escalating tourist arrivals — especially in Asia.

The ATF has been supporting this principal by holding its conference is secondary destinations, including Chiang Mai in Thailand last year and Ha Long City in 2019.

ATF delegates aboard a tour boat in Ha Long Bay in Vietnam.