Home › Destinations › Welcome to the USA

Welcome to the USA 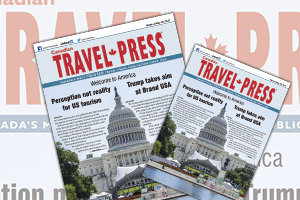 Is it a perception issue or is it political reality that’s been putting the squeeze on America’s travel and tourism of late?

That’s the question we posed to Brand USA chief executive Chris Thompson in the final run-up to this year’s mammoth IPW trade show and he came down firmly on the side of perception, reports Quebec editor, Mike Dunbar in this week’s digital edition of Canadian Travel Press.

According to Thompson, Brand USA is faced with market negativity that’s being fueled by a backlash to some of the early policy decisions of the Trump administration.

He explained, “Any time we have a new president there’s a new approach to governing and this administration has chosen to bring in policies that do impact tourism.”

But he stressed, “The destination is better than ever; that hasn’t changed and neither has the way anyone acquires a visa. Nor has the arrivals process changed except for the eight countries affected by the laptop ban.

“Policy changes create uncertainty but the highest priority for any country is its security. We’re living in a different world and we all have to adjust and be tolerant.”

In a letter to partner organizations, the Brand USA CEO conceded that “our world and the US tourism industry are facing uncertainty” but he pointed out, “There is more recognition today than ever before that travel and tourism are significant sources of fueling our nation’s economy, creating jobs and helping to connect people and cultures for greater understanding.”