Welcome To The Travel Universe 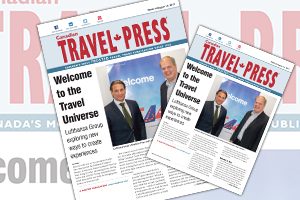 Since he took over as vice-president of sales, The Americas for the Lufthansa Group in January of this year, Tamur Goudarzi-Pour has been living in rather interesting times, having had to deal with the Trump Administration’s travel bans and its new rules for bringing electronics on board aircraft, reports executive editor, Bob Mowat in this week’s digital edition of Canadian Travel Press.

But it doesn’t seem to bother him.

In fact, he’s rather philosophical about it, telling Canadian Travel Press in a recent interview, that for airlines, not just in North America, but around the world, these kinds of things have pretty much become part of the daily routine for those in the airline business.

Canada has turned in good figures and good growth for the first five months of 2017 and the Joint Venture (JV) is going well, he noted.

One of the points that Goudarzi-Pour likes to make is that the Lufthansa Group’s global network is one of its key differences from its competitors, telling CTP that: “Being a global player for us is intrinsically linked to our network and we serve here in Canada, 59 weekly frequencies and this connects in the hubs – Frankfurt, Munich, Vienna, Zurich, Brussels (well Brussels is technically speaking not necessarily a hub, but it’s a connector) – and we’re connecting there globally.”

He also explained that while Europe is the airline’s home market, the Lufthansa Group has a lot of VFR business to destinations like Iran, India, Israel, Eastern Europe, Russia, etc. and “where we find substantial, sizeable ethnic communities – like here in Canada – we connect them [to these destinations] and I think that’s where we’re also strong.”