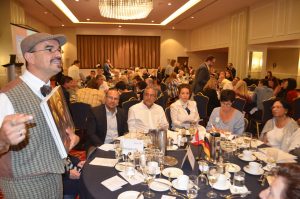 Germany was on the menu as Vancouver travel agents took part in an innovative German tourism dinner event recently at a downtown Vancouver hotel.

It was the first of four stops on a west coast tour that headed south to the US after the Vancouver event.

The Pinnacle Hotel Harbourfront hosted the Destination Germany Roadshow, which not only featured an overview of German tourism events and highlights, but also a trade show staffed by reps from many German cities and regions.

Joining them were executive staff from product suppliers such as Lufthansa, Air Canada, Maritim Hotels and Rail Europe, plus tour operators like Globus, Insight Vacations and TravelBound. Even reps from Frankfurt Airport were on site.

Between dinner and desert, reps moved from table to table to give agents rapid fire presentations on each of their companies and jurisdictions. The amount of information imparted over the course of three-hour dinner event was impressive.

For instance, agents learned that there was still time to soak up commemorations to the Reformation this year, which is marking 500 years since its creation by Martin Luther 1517. And they also learned that the preparations for the Passion Play in Oberammergau are now underway for its presentations during 2020. Reservations are already available for these 102 landmark performances, which are staged just once every 10 years, and will be sold out soon, said Claire Rottaire of Insight.

Other news? A discounted DB Rail pass is available for the month of October from Rail Europe. The year of digitization is underway at Lufthansa, ensuring improved services for baggage tracking, onboard entertainment systems and more. Discounts on Germany travel are available until the end of November from Globus. Four new hotels have opened in Freiburg, adding 700 new beds to the city inventory. And the “Historical Festival 2018” marks 200 years for the Stuttgart Beer Festival.

Pictured, Wolfgang Gartner makes his presentation on the Saxony region of Germany.