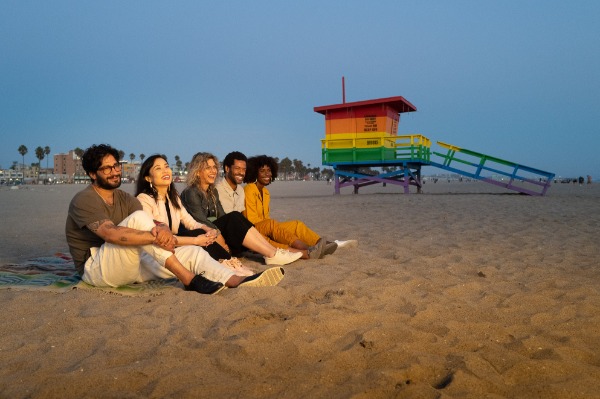 Los Angeles Tourism is inviting visitors to discover what’s “Now Playing” in the City of Angels with the kickoff of a new advertising campaign that shines the spotlight on wide range of attractions, experiences, entertainment and accommodations that can only be found in L.A.

Leading the campaign is a dynamic 30 second ad portraying a writer at work on an ever-changing screenplay that follows a group of friends as they crisscross the city, visiting L.A. highlights such as the Hollywood Walk of Fame, the Los Angeles County Museum of Art, the Music Center and Venice Beach.

Don Skeoch, Chief Marketing Officer for the Los Angeles Tourism & Convention Board, observes that: “Now Playing instantly evokes what’s unique about Los Angeles. With this campaign, we’ve combined the combined vocabulary of the the screenwriter and the visual language of cinema to creatively capture what makes L.A. an unparalleled visitor destination.”

True to Los Angeles’ identity, the ad also features top talent that give the campaign an added touch of Hollywood magic. Both ads are narrated by stage, screen and TV veteran Jenifer Lewis, who recently starred as the comedic matriarch on ABC’s hit television show, “black-ish.” Steve Aoki, Southern Californian DJ, record producer, executive and heir to the Benihana restaurant franchise also lends his creative talents with a colourful performance in the spot.

The campaign is slated to appear in traditional and digital marketing channels, both domestically and in international markets including Australia, Canada, Mexico and the United Kingdom.

In celebration of Los Angeles’ long-standing connection to Mexico, the advertising campaign is a co- production between Plus Plus and Panamericana, bridging the cultural gap between two sister cities of Los Angeles and Mexico City. In honour of this connection, award-winning Director Pablo Delgado Sánchez of Mexico City was selected to direct the spot.