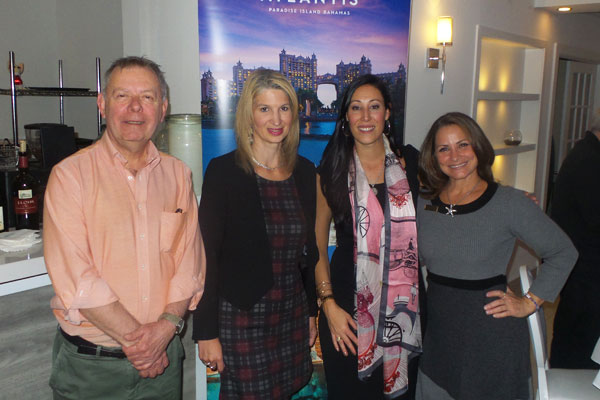 Management at Paradise Island, Bahamas’ Atlantis resort isn’t allowing the grass to grow under their feet.

“We literally are never stopping, we are constantly renovating,” she said of a property that amounts to “six different resorts” that offer guests choices ranging from budget to luxury. “We are accommodating every level of customer.”

Among Altantis’ attractions is what Alexander labelled a “141-acre waterscape” that she said is “where water meets wonder.”

Guests visiting Aquaventure will find the likes of two rivers – a “lazy one and a crazy one,” she continued. Aquaventure also features slides, pools and more than 20 swimming areas.

Guests can snorkel alongside tropical fish in the Ruins Lagoon, described as an “amazing 30-minute snorkeling adventure amid the sunken ruins and artifacts of the lost city of Atlantis.”

“No one can rival what we do at Aquaventure,” Alexander stated.

Atlantis also features a casino, live music, 21 restaurants, 19 bars and lounges, and the Aura Nightclub, which has VIP seating, DJs, a sunken dance floor and bars.

Other features include golf, a 10,000-square-foot fitness facility with basketball and tennis courts, and a spa.

Commissionable dining plans are available, but aren’t required, said Alexander who added that Atlantis “might not be an inexpensive vacation, but we’re worth every penny.”

Alexander also reported that Atlantis has been accredited by the Association of Zoos and Aquariums, and helps rehabilitate and then release some ailing ocean creatures into the sea.

She also praised Paradise Island as an “almost two-mile stretch of translucent water” which enables visitors to “have their toes in powdery white sand.”

The destination is “safe and easy to navigate,” Alexander added.

She also said there is a “ridiculous amount of air service from this country” to the Nassau area.