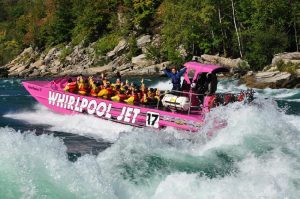 Whirlpool Jet Boat Tours is marking its 25th season taking passengers on action-packed rides through the whitewater of the Niagara River.

Following a mild winter and early spring, Whirlpool kicked off the season on April 22, offering jet boat rides a couple of weeks earlier than usual from its dock in Old Towne Niagara-on-the-Lake, Ont. Departures began on the US side of the river in Lewiston, N.Y. in late April and are set to begin from Niagara Falls on June 25.

The company officially opened its doors to the public in 1992 with a single boat, taking passengers for whitewater rides from the mouth of the Niagara River in Niagara-on-the-Lake, through the Class 5 Devil’s Hole Rapids and to just below the powerful Niagara Whirlpool.

Twenty-five seasons later, Whirlpool has a fleet of eight 50-passenger jet boats that take passengers on adrenalin-filled trips from three departure locations. In the process, Whirlpool has earned a reputation as one of the top tourism attractions in the region. Last year, the Ontario Tourism Marketing Partnership Corporation named Whirlpool Jet Boat Tours one of seven must-do tourism attractions as part of the Ontario Signature Experience Series.

Passengers can choose between two types of trips – wet or dry. Guests in open-topped jet boats are guaranteed to return to the dock soaking wet, doused with gallons of water while their boat pilot powers them through the rapids at high speed and expertly spins them through the chop in a complete 360-degree turn. Passengers in the covered Jet Dome get the same thrill ride, minus the splash, and return as dry as they were at the outset. Tours last approximately one hour.

Along the way, tour leaders give passengers highlights about the river’s geology and history. Whirlpool Jet Boat Tours has a sister company, Niagara Sunset Cruises, that offers tours aboard the Niagara Belle – a fully restored New Orleans-style paddle wheeler – for those who’d prefer to take in the sights of the Niagara River at a slower pace. In addition to individual bookings, Whirlpool Jet Boat Tours offers special rates for corporate groups, family groups and residents of Niagara.