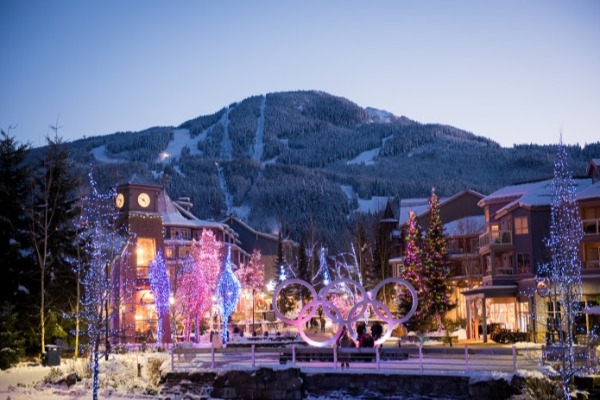 Whistler is celebrating the 10th anniversary of hosting the 2010 Olympic and Paralympic Winter Games.

Leaving a lasting mark on the resort, a number of Olympic legacies live on in Whistler for guests to enjoy.

Since hosting the bobsleigh, luge, and skeleton events, the Whistler Sliding Centre remains an active training and competition site, while also offering a number of Olympic experiences for guests such as the thrill of sliding in a passenger bobsleigh or the adrenaline rush of a solo skeleton ride. Over at Whistler Olympic Park, the site of the ski jumping, biathlon, cross-country skiing, and Nordic combined events during the Games, guests can discover the original Nordic trails and experience the biathlon shooting range just as the 2010 athletes did.

Within Whistler Village, Whistler Olympic Plaza, where nightly medal ceremonies were held during the Games, is now a popular year-round outdoor gathering space. Surrounded by cafés, restaurants and local shops, the Plaza offers guests a picnic-perfect lawn, playground, winter skating rink and numerous outdoor concerts throughout the summer. Photo opportunities with Olympic and Paralympic memorabilia can also be found in the Plaza, including the Olympic Rings and Cauldron, the Paralympic Agitos, and numerous installations and displays celebrating athletes.

On Whistler Mountain, the Official Alpine Skiing Venue, skiers and snowboarders can relive the energy of the Games on the signature Dave Murray Downhill trail and Franz’s ski runs, the sites of the downhill, slalom, giant slalom, super combined and superG race events. Those looking for an extra special experience can book a private lesson with an Olympian through Whistler Blackcomb’s Ski with an Olympian program.

Alongside Whistler’s many Olympic experience offerings, the resort will also be hosting a series of special events throughout February and March.