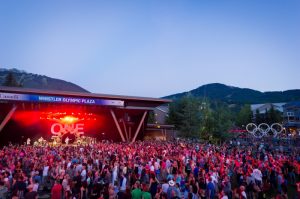 Summer in Whistler is in full swing and now the soundtrack has officially been set. The Whistler Presents free outdoor concert series has confirmed a solid schedule of 10 exceptional acts for the sixth year of this celebrated event.

Artists Deya Doya, Steel Pulse, Jose Gonzalez, Hannah Georgas, The Strumbellas, Sarah Harmer, Whitehorse, The Acoustical Sounds of Big Sugar, Mother Mother and Steven Page are all lined up to play under the stars this summer at the Whistler Olympic Plaza.

The concert series gets underway July 28 at 8 p.m. with Deya Doya and will run until Sept. 10 when Steven Page plays the last scheduled show at 7 p.m.

As a special addition to the concert series, the final Tragically Hip concert will be broadcast live by CBC at 5:30 p.m. on the evening of Aug. 20.

For the complete concert schedule and more details visit http://www.whistler.com/events/concerts.