Home › News › A Model For Success

A Model For Success

The Travel Agent Next Door Is All About Win Win Win 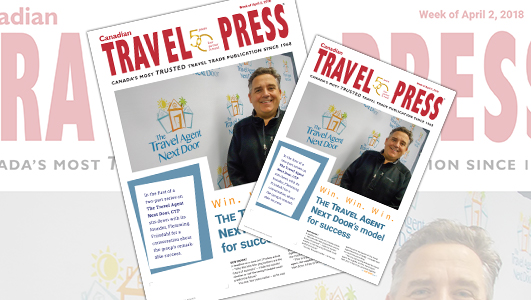 A headline on a June 2017 Forbes article – “Why Win-Win-Win propositions are the future of business” – made me wonder whether or not Flemming Friisdahl could predict the future?

You see, four years earlier – as he was gearing up for the launch of The Travel Agent Next Door (TTAND) – Friisdahl told me much the same thing, writes CTP’s executive editor, Bob Mowat in the first of a two-part series on TTAND in this week’s digital edition of Canadian Travel Press.

“This is a partnership between the travel agent, the supplier and the Travel Agent Next Door. It has to be cemented together that way and that’s a very, very different approach and I think that’s why the suppliers have been extremely supportive of this,” he stated in March 2014.

Simply put, TTAND was all about Win. Win. Win.

With Friisdahl telling CTP: “You know, knock on wood, we’ve been somewhat successful. We finished last year at over $80-million in sales [and] we have a lot more suppliers coming and knocking on our doors. We have people that offer us money to make them an approved or preferred supplier and we say ‘No, thank you.’ And it’s because it’s not a win for our other suppliers. And if it’s not a win for our other supplier partners, then eventually, they’re going to walk away and we’ll end up being like every other host agency.”