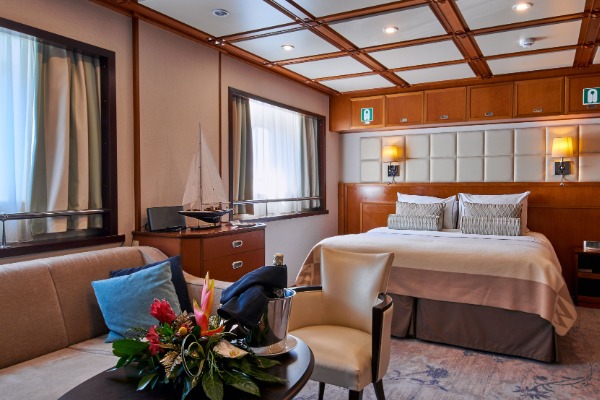 Windstar Cruises’ flagship Wind Surf has emerged from a major renovation with changes including a new luxurious Officer’s Suite.

The nautically appointed suite on the five-masted schooner (the largest sailing cruise ship in the world) is located directly behind the Bridge, in an area labeled “crew only.”

While all of Windstar’s six ships have an open Bridge – where guests can interact with the ship’s officers and get a rare, behind-the-scenes look at cruising – the Officer’s Suite is the only public accommodation in the officers’ quarters. It is believed to be the only suite of its kind at sea – and perhaps the ultimate true cruise enthusiasts’ accommodation.

“We renovated this very unique suite with more of a nautical theme to reflect its exclusive location tucked away just behind the Bridge,” said Windstar president John Delaney. “Guests in this suite share exclusive company with the Captain, Chief Officer, Hotel Manager and Chief Engineer. It’s absolutely 180 degrees from ordinary with nothing else like it in the industry.”

The new 242- square foot Officer’s Suite sports a nautical theme with a bedroom, full bath with Jacuzzi tub, and living room with a wide screen television. Décor includes a sextant, Wind Surf print, a museum-quality model of a J-class sailing ship and binoculars.

While in dry dock, the entire ship received a significant renaissance from the outer hull (including a complete sandblasting and painting) to every room and public space on the ship. Part of the major evolution of this popular vessel included 16 new guest rooms bringing the capacity on board to 342 guests (an increase from 310). Additional crew accommodations were also created to raise the crew level to ensure a continued 1 to 1.5 staff to guest ratio.

Public areas now have a more social atmosphere and “living room” feel with an expanded lounge and bar with new furnishings and a stage. World Spa by Windstar, a new state-of-the-art spa and wellness centre, is also a main element in the renaissance of Wind Surf and will be run by Windstar’s partner One Spa World.