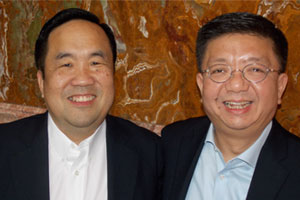 Anthony Lau, executive director of the Hong Kong Tourism Board (HKTB), was all smiles during a recent stop in Toronto, which shouldn’t be surprising as there’s lots of good news coming out of the destination these days.

Topping the list is the fact that Hong Kong and Taiwan’s joint tourism promotional efforts – launched in 2016 – have produced some rather remarkable results.

Not surprisingly, Lau said that the HKTB will be increasing its promotional efforts in the next year of the program, which is all part of the HKTB’s strategy of developing multi-destinational travel to Asia.

He noted that with the destination’s supply of new rooms growing, hotel rates are becoming increasingly attractive.

Over the next six years, Lau said, Hong Kong will see about 2,000 rooms added each year, increasing its inventory to close to 84,000 rooms by the end of that time.

Hong Kong is also gearing up to give visitors more new experiences and opportunities to explore the destination.

To do that Lau said the destination is developing its heritage and cultural offerings, with the first happening in its Central area. Called Old Town Central, the area will give visitors the chance to explore an area that was the birthplace of colonial Hong Kong.

For more, go to http://www.DiscoverHongKong.com/ca.