X Marks The Spot in Toronto 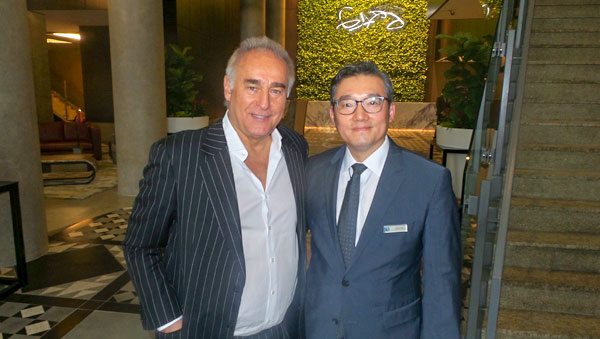 The latest addition to Toronto’s hotel scene will live up to its phonetic name.

Hotel X Toronto is slated to open in March, with the luxury property having begun taking reservations for March 18 and Adele Gutman, vice-president of sales marketing and revenue for the Library Hotel Collection, which Hotel X Toronto is a member of, says its name is a suitable one, given that it’s found on the grounds of Exhibition Place, commonly referred to as the Ex by Torontonians. Exhibition Place – near Toronto’s downtown core – is among other things home to the lengthy Canadian National Exhibition summer fair each year that draws hundreds of thousands of people.

The 404-room hotel hosted travel industry personnel Thursday, with Henry Kallan, president of the Library Hotel Collection, telling his audience that the seventh hotel in his collection amounts to an “urban resort hotel… Anything and everything you want to do is here… I think we’re doing something that simply doesn’t exist in any other North American city.”

Gutman noted there’s plenty of green space in the area, with the hotel designed to “surround our guests with the serenity of nature.” Guests will find photographs of natural settings throughout the hotel and meeting rooms are named after Toronto parks.

The hotel’s Falcon SkyBar is a three-storey rooftop lounge that received its name because peregrine falcons nest in the area.

The hotel is pet-friendly.

Shuttle service that will take guests to both downtown Toronto’s Union Station – on the city’s subway system and also a Via Rail hub – and Billy Bishop Toronto City Airport will be available.

The Library Collection also has properties in New York City, Budapest and Prague.