Home › Events › A Mission Of Happiness For Club Med

A Mission Of Happiness For Club Med 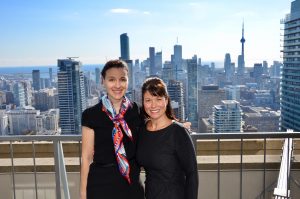 Club Med’s Carolyne Doyon says the all-inclusive vacation provider’s mission can be summed up in one quote by founder Gérard Blitz: “The aim of life is to be happy. The place to be happy is here. The time to be happy is now.”

After being “in the happiness business for 67 years,” Club Med, which boasts 68 sun and ski resorts across five continents, continues to grow with another 15 resorts slated to open by 2019.

“Club Med resorts have evolved through the years,” says Doyon, the senior vice-president of Club Med Canada and Mexico. “And it’s in 2004 that Club Med started its true repositioning of the brand to become the leader of the upscale all-inclusive vacation.”

A major project in the pipeline is the recently announced development of a ski resort in Le Massif de Charlevoix, located one hour from Quebec City.

“In a nutshell Le Massif de Charlevoix will be the first Club Med resort in Canada,” she says. “A 4-Trident resort with a 5-Trident luxury space. A village resort with stunning waterfront view. The first Club Med mountain worldwide resort open four seasons. The resort will cater to families, couples and groups because we will have conference rooms and we will have an international clientele. Le Massif is a great addition to Club Med’s already existing ski portfolio.”

Like the company’s sun offer, which is all-inclusive, she says its ski resorts include lift tickets, ski lessons, après ski and more. There are currently 24 Club Med ski resorts in the Alps and Asia (two in Japan, and two in China). Next month will see the opening of another property, Samoëns Morillon Grand Massif in the French Alps, and a year later, also in the French Alps, the 1-million Euro Arc 1600 project is expected to open.

In addition to catering to couples and groups, Doyon says Club Med also has a strong offer for families and multi-generational travellers, complete with kid’s clubs and added value, like free stays for kids under four. As stats found 56% of millennial-aged parents admitted having kids negatively impacted their vacations, she says Club Med’s offer aims to change that.

Club Med by the numbers

Cancun Yucatan, Mexico features a completely renovated Jade 5 Trident Luxury Space and a new Tacos Arte beach lounge restaurant, and a wine cellar. All existing rooms will be renovated by the end of 2017, and 60 new additional Aguamarina family rooms will be available in July 2018, with a new pool and snacking corner.

Next month will see the opening of Samoëns Morillon Grand Massif, French Alps in the heart of the Grand Massif ski area, the 4th largest ski area in France with 265 km of ski slopes. The upscale resort  is located 1h15 from Geneva at the top of a mountain and has 420 rooms, and offers childcare service for children aged 4 to 17.

Opio in Provence, France will be the second Club Med to feature the CREACTIVE playground by Cirque du Soleil, with 30 acrobatic and artistic activities. Along with the rooms, which have been renovated, La Provence restaurant has been reimagined and boasts a new outdoor terrace.

Club Med Cefalú in Sicily, Italy will open in summer 2018 overlooking the Cefalú bay with a view of the medieval city, known as one of the most prestigious tourist destinations in the world. This will mark Club Med’s first 5 Trident Resort in Europe, with 302 rooms, 3 restaurants, 4 bars, one of which is a beach bar and a main restaurant with a terrace overlooking the Cefalú bay, two pools, and a Club Med signature spa.

Pictured at a lunch event in Toronto yesterday (Nov. 8) at The One Eighty are Amélie Brouhard, marketing and communication director, Club Med Canada, and Doyon.