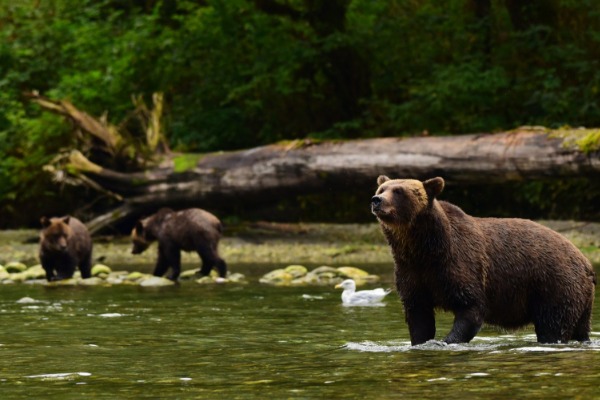 Maple Leaf Adventures is offering Canadians a rare opportunity to experience one of its Great Bear Rainforest expeditions that typically sell out up to a year or more in advance.

The trips take only a limited handful of people into the remote wilderness onboard Cascadia (an expedition-style yacht), Swell (a classic, converted 88-foot tugboat) and Maple Leaf (a 92-foot sailing ship), they feature special access to wildlife havens and personalized adventures among coastal fjords and archipelagos.

Gordon continued: “Normally, people schedule their big trips years in advance but with the pandemic having crushed international travel plans, and with Canada open to Canadians now, people are choosing places like the Great Bear Rainforest for this year.”

The Great Bear Rainforest, on BC’s west coast, is known for weeklong wildlife safaris featuring orcas and other whales, grizzly bears, and the elusive Kermode (“spirit”) bear, the rarest bear in the planet. There are no roads, and virtually no Wifi and no cellular service to call for directions – so guided safaris by water are the way to go.

In fact, 2021 marks the fifth anniversary of a landmark agreement to protect the Great Bear Rainforest, the largest remaining tract of unspoiled temperate rainforest in the world. Extending from BC’s Discovery Islands in the south to the BC-Alaska border in the north, the Great Bear Rainforest is the size of Ireland and home to 26 First Nations that have lived there since time immemorial.

In addition to Canadians’ increased interest in Canadian expedition travel, industry analysts say more and more people wish to travel sustainably after the pandemic. Surveys by Booking.com and the World Travel and Tourism Council predict a 30% uptick in the demand for ecotourism like Maple Leaf’s trips.

Maple Leaf Adventures has a reputation as one of Canada’s top sustainable tour companies, and its operations are informed by the principles of ecotourism. During the COVID-19 pandemic when the indigenous territories in the Great Bear Rainforest were closed to travellers, Maple Leaf Adventures took the opportunity to collaborate with indigenous governments and its industry to create the largest-ever clean-up of the Great Bear’s coastline.

Funded by BC’s Clean Coast, Clean Waters Initiative fund and led by the Small Ship Tour Operators Association of BC (SSTOA) and Wilderness Tourism Association of BC, the initiative worked its way north along the outer coast from Cape Caution to Banks Island in two 6-week expeditions in 2020 and 2021.

In all, 9 expedition vessels, 17 skiffs, 1 tug and barge, 1 helicopter removed 337 metric tonnes of marine debris was collected from almost 1000 kilometres of coastline.

Future guests will have the opportunity to participate in their own mini Marine Debris Removal Initiative as part of a new citizen science program that will be available on certain Great Bear Rainforest trips.

Go to www.mapleleafadventures.com for more.