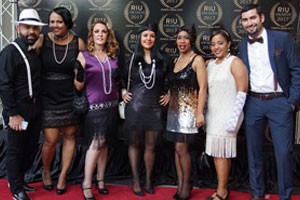 RIU Hotels & Resorts celebrated its top travel agency partners from Canada and the US during its Second Annual RIU Awards at the Riu Palace Bavaro in Punta Cana.

The award-winning agencies were rewarded with a trip for two to the Dominican Republic to attend the RIU Awards Ceremony.

In addition to the awards program, they were treated to a VIP weekend, inclusive of special tours of the island, leisure activities and special events.

The awards also aim to strengthen RIU brand loyalty in the US and Canadian market and re-launch other programs such as Riu Agents, Riu Specialist; the urban hotel line Riu Plaza as well as Weddings and Groups (MICE).