Home › News › A Slice of Paradise

A Slice of Paradise 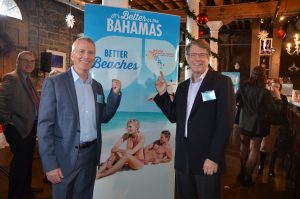 In spite of a 3% decrease in visitation from Canada in 2016 likely due to a mild winter and a low loonie, representatives from Nassau Paradise Island are hoping for strong arrivals from its No. 2 international market in 2017.

“We still have great non-stop air service with Air Canada rouge, WestJet and Sunwing, and we’re your closest Caribbean destination,” Fred Lounsberry, CEO of Nassau Paradise Island Promotion Board told PressToday at a luncheon in Toronto this week (Nov. 30).

“We have a lot of new product coming online, we have a big new all-inclusive resort, Warwick Paradise Island Bahamas, and Baha Mar – that is moving along so I think that’s going to open sooner rather than later,” Lounsberry said.

In addition to the recent reopening of Sandals Royal Bahamian, further developments in the destination include:

While Nassau Paradise Island is often associated with a higher price point, Lounsberry says there are a variety of accommodations to suit every budget.

“I think we have a very diverse destination with a lot of small boutique hotels,” he said. “There’s Bay View Suites, and The Bob Marley Resort & Spa reopened so for folks who want a smaller more relaxed vacation, we’ve got a lot of new product.”

As for what to do in the destination, Lounsberry pointed to an increased focus on local, cultural and interactive experiences such as culinary, cigar or chocolate making and rum tours, as well as day trips to Exuma for those who seek to swim with pigs.

There are also a slew of upcoming events and festivals happening, including the Pure Silk-Bahamas LPGA Classic, FIFA Beach Soccer World Cup 2017 and the Junkanoo parade.