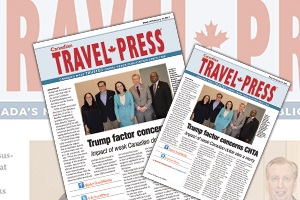 Trade reaction to the brand-new GO Canada offering from Air Canada Vacations has been nothing short of “fantastic,” according to Luigi Iannello, the operator’s senior director of strategy and business development.

“And the myriad ground suppliers featured in the 100-page brochure are “very excited at this opportunity and the increased exposure they’re getting,” he added.

What’s more, reaction from the general public has also been positive said Iannello who reported, “We’ve caught a lot of people by surprise by showing them just how much there is to do in Canada from coast to coast.”

Even though the mid-January launch meant that ACV missed the peak of the ski vacation booking period, Iannello said consumer uptake overall has been “decent” and in line with expectations.

Returning to travel trade response, the Montreal-based exec stated, “It’s been very positive and travel agents have been telling us they’re happy to have a new type of product to sell. We’ve made it easy for them, so now it’s just a question of getting people into the stores to book it.”

Traditionally, Canadians tend to book late for domestic travel because there’s an impression that the further the destination the earlier the booking even though the distance from Halifax to Vancouver is greater that Halifax to London,” he said

Because it’s a domestic program ACV is expecting a later booking curve so Iannello revealed that ACV has a promotional plan in the works for the weeks and months ahead designed to reward an early buy and to “to drive consumers into travel agencies to ask for this.”