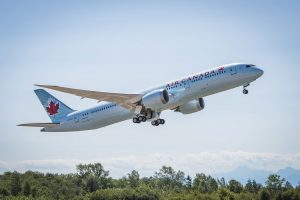 It also marks the airline’s first route from Montreal to be operated with its Boeing 787-8 Dreamliner aircraft.

“With the launch of Montreal-Shanghai non-stop service, we are delighted to inaugurate Air Canada’s first direct flights between Montreal and Asia, building on Air Canada’s success in the rapidly growing Chinese market,” said Benjamin Smith, president, Passenger Airlines at Air Canada. “This also marks the introduction of Air Canada’s first 787 Dreamliner service from Montreal featuring our industry-leading international product, and further underlines our commitment to expand our global reach from Montreal-Trudeau reinforcing it as a strategic hub that offers easy and convenient connections from points throughout Quebec, Atlantic Canada and the United States. With an average elapsed time of over 13.5 hours, it is the longest flight ever operated by any carrier from Montréal-Trudeau airport.”

In Montreal, flights are timed to optimize connections to and from the carrier’s extensive Eastern Canada and US networks including Ottawa, Quebec City, Halifax, New York and Boston.