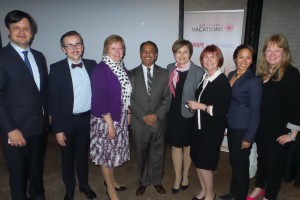 Air Canada rouge is looking well beyond Big Ben and the Eiffel Tower with its summer Europe program.

The airline will have non-stop summer service from Toronto to Prague, Budapest and Warsaw, with Prague service running May 29 to Sept. 29, Warsaw flights available from June 14 to Sept. 30 and the carrier linking Ontario’s capital with Budapest from June 10 to Oct. 15.

The new service underscores the quick growth Air Canada rouge – launched in July 2013 – has been seeing, with the carrier now having some 95 routes and 44 planes, Bathija added.

The carrier has a “fleet that connects very well from all of Canada,” he continued.

The gathering was told that holiday options in Central and Eastern Europe include river cruises along such waterways as the Danube.
Czech Republic ambassador Pavel Hrncir said the upcoming Prague service has him hopeful that Canadian visitations to his country this year will reach 100,000, up from 86,000 last year. The country has numerous UNESCO World Heritage Sites and more than 200 castles and chateaux, he said.

Hungarian ambassador Balint Odor in turn declared that “Hungary is not only Budapest,” with tourism attractions in his “very secular country” found throughout the nation.

Meanwhile, Bathija said Air Canada is “one of only 12 airlines in the world that flies to six continents.”