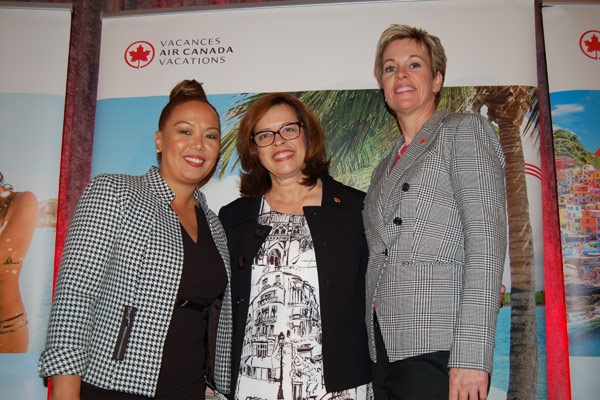 Chapter two of the road show took place at the Delta Burnaby hotel on the east side of Vancouver, one night after the ACV DreamMakers mission got underway in Calgary.

An enthusiastic crowd of about 300 travel agents made it the Vancouver event, where they were treated to a drink ticket and a variety of appetizers and main dishes in the hotel’s Grand Villa ballroom. There they had to chance to browse through product tables staffed by reps from 45 travel partner suppliers, before taking their seats to hear the designated speakers describe what has been prepared by ACV for this upcoming winter escape season.

Sal Buccellato, national sales director for Bahia Principe, set the tone when he reported that the Farmer’s Almanac was calling for a long and cold winter – as indeed it is, with the latest report saying that Canadians should brace for frigid and frosty conditions during the winter of 2019/20.

This raised one of many cheers from the agents, who will be anticipating more vacation purchases by winter escapees with that kind of forecast. They spent the rest of the evening learning about trade-specific offers from ACV and partner suppliers such as Bahia Principe.

One of the most consistently successful of those is the partnership forged between Sandals/Beaches Resorts, and ACV. Speaking for Sandals from the ballroom stage was Maureen Barnes-Smith, director of sales and marketing in Canada for the company. She praised the partnership, saying that Air Canada is the only carrier to offer direct, year-round services to all the islands in the Caribbean that support Sandals and Beaches resorts.

Dana Gain, the ACV senior director of sales, groups and partnerships, joined Marigold Frontuna, general sales manager for Western Canada, on stage to review and present the special offers and new programs offered to Canadian travel agents and their clients this year.

These included, for instance, news that 63 new resorts had been added to the ACV product roster this year, for a total of 750 resorts in 40 sunny southern destinations. An early booking bonus of $500 per couple is available, as is an offer to buy one Escape package and get a second for 50% off.

The seat capacity on Air Canada Rouge flights to the destinations is increasing by 11% for the winter season, said Gain. She said the Mexico destinations available from Vancouver include Cancun, the Riviera Maya, Mexico City, Puerto Vallarta, Los Cabos, Huatulco and Ixtapa/Zihuatanejo. Destinations in the Caribbean from Vancouver include Cuba, Jamaica, the Bahamas and the Dominican Republic. She also noted that Rouge premium seat upgrades start at $299 per person.

Gain also described progress on the new ACV website, which has been designed to increase distribution and flexibility.

But even before describing the new ACV offers, Gain reminded the assembled crowd that Air Canada Vacations had been chosen as the favourite Canada/U.S. tour operator and favourite Hawaii tour operator by 6,500 travel agent voters in the annual Baxter Agents Choice Awards industry survey for 2019.

Upcoming on Friday Sept. 13 is the ACV DreamMakers event in Halifax at the Halifax Convention Centre, followed by the Crowne Plaza Montreal Airport on Sept. 17, and finally the Universal Event Space in Toronto on Sept. 19.