Agents Discover The Wonders Of Isrotel 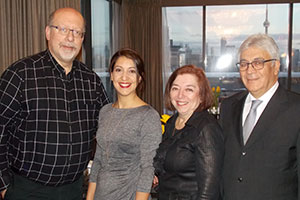 Officials from Israel’s Isrotel hotel group were in Toronto last night to meet with about 60 travel agents to update them on some new developments as well as exploring opportunities here in Canada.

Kara should know as he spent a good number of years here, handling El Al’s operations out of Canada back in the mid-1980s, early 1990s.

He noted that currently Isrotel has 19 properties throughout Israel, with 2 hotels – Orient in Jerusalem and Publica in Herzliya – set to open in June of this year.

Kara explained that Isrotel is the second largest, local hotel group in Israel and, as a result, he pointed out that because “we’re not an international chain, we have to work harder.”

Currently, Isrotel sees about 30% of its clients coming from North America, and while Kara said that it’s difficult to quantify the number of Canadians in that group, there are a good number staying at Isrotel’s hotels and, even better, they are generally repeat visitors.

For more on Isrotel, go to http://www.isrotel.com .

Seen in the photo, from l to r, are Jerry Adler of the Israel Government Tourist Office (IGTO); Mor Ram, regional sales manager, North America for Isrotel; Ellen Melman of IGTO; and Nahum Kara, director of marketing and sales for Isrotel.