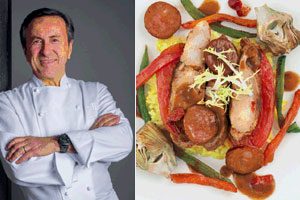 From March 1 until the end of February 2018, Michelin-starred chef Daniel Boulud will be creating new dishes for Business class passengers on Air France flights out of Montreal, Toronto and Vancouver.

In a move designed to surprise its customers and confirm its role as an ambassador of fine French dining in the sky, Air France has asked French chef Boulud who’s settled in New York and creator of the Café Boulud at the Four Seasons Hotel in Toronto and Maison Boulud at the Ritz-Carlton Montreal to create dishes for its Business class menu. Every month, a new dish will be offered.

Inspired by French culinary traditions, Boulud enhances his dishes with warm spices and flavours from the Mediterranean, the Basque Country and even Japan. Among these are: Salmon with Fennel, Chickpea and Sumac; Braised Chicken Basquaise with Chorizo, Peppers and Saffron Rice; and Braised Lamb with Spring Root Vegetables.