Air France Teams Up With TIFF 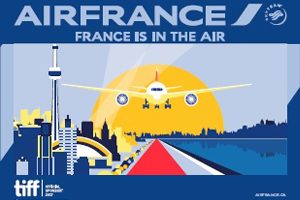 Air France has announced that it will be the Official Airline of the 2017 Toronto International Film Festival« (TIFF).

This marks the the first time that the airline partners as a sponsor of the Festival, whose 42nd edition runs from Sept. 7 to Sept. 17.

Air France will be the Presenting Sponsor of the Platform program, which embodies the next generation of masters of cinema, and award the winner with the Toronto Platform Prize.

In 2016 the line-up of the Platform program included Jackie and 2017’s Oscar-winner for Best Picture, Moonlight.

During the Festival, Air France will welcome Festival-goers at the Air Bistro Paris on Festival Street, a pedestrian promenade featuring free film, music, interactive activations, and extended restaurant patios, from September 7 to 10. The Paris bistro-type experience will include macarons and (non-alcoholic) bubbly.

Passers-by will be able to try their chance at winning two fabulous French experiences.

The first prize is the Air France “Win a trip to Cannes Festival 2018” contest, which includes two Business-class tickets from Toronto to Nice on Air France; one night at Cannes’ five-star Carleton hotel; and a four-night stay at Club Med’s Opio Resort in Provence.

This prize also features the famous walk up the red-carpet stairs at the French Festival, which will take place in May 2018.

The second prize will take the winners to Paris on board Air France in Business class for a five-night stay at a five-star hotel, and includes a spa treatment, dinner for two and a visit to the famous Harcourt Studios.

Jean-Noel Rault, vice-president and general manager of Air France-KLM Canada, commented: “Air France has always been extensively involved in the arts and culture. As the official Airline of TIFF, we are happy to open opportunities for worldwide talents, directors and film industry representatives to meet in Toronto. We are proud to support TIFF and its Platform programme and delighted to provide movie fans and visitors alike with the opportunity to win a unique Cannes or Paris experience.”