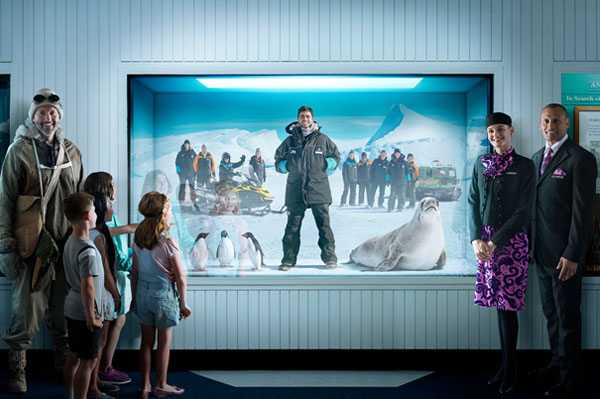 Once again the airline has produced an entertaining and informative safety video – https://www.youtube.com/watch?v=TEsHqdA9dV0&feature=youtu.be – this time turning the spotlight on Antarctica to showcase the frozen continent and the important climate and environmental science underway there.

“This safety video highlights Air New Zealands support of the scientists striving to make discoveries that are going to help humanity  a cause which aligns with my own commitment to the environment. To know the airline is doing its job to help us understand how climate change is going to affect us is something that is very important to me,” he said. 

And to minimize the environmental impact of filming, a total crew of just six travelled to Antarctica, with Scott Base scientists and staff doubling as supporting talent in the safety video. The airline has also released television and online content (http://wheretonext.airnewzealand.co.nz/), providing a more in-depth look at Antarctica and the work being done there.

Beggs said: “Air New Zealand’s safety videos have collectively attracted more than 130 million online views. Our teams are thrilled to have such a significant global platform to amplify their work and were confident it will take our outreach efforts to the next level.”

Christchurch has been a gateway to Antarctica for more than 100 years and the museum holds an internationally significant collection of artefacts from early expeditions.

Air New Zealand Global Head of Brand and Content Marketing Jodi Williams says the airline has supported Antarctic science for close to a decade, and an important focus for its partnership is the three-year Biological Resilience Project.

Said Williams: “Multiple teams of researchers are investigating ecosystems on land and water in the Ross Sea area. The goal is to build a monitoring network to understand how rapidly the impacts of environmental change expected in a warming world may play out.”

And Williams continued: “We are incredibly proud to contribute to this world-class research and are confident the safety video project will encourage millions of people to reflect on the role they can play to minimize their own impact on our environment.”