GlobalData Tracks The Top Ten On Social Media In 2021 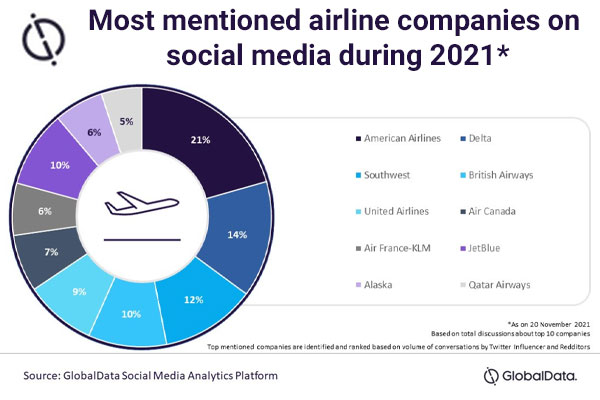 Following the ease of travel restrictions and reopening of international borders for vaccinated travellers, global airlines companies are striving to maintain services majorly by addressing staffing shortage issue amid massively increase in bookings.

Against this backdrop, American Airlines has emerged as the top mentioned airline operator among the top 10 most mentioned airlines companies on the basis of social media conversations of Twitter influencers and Redditors in 2021, GlobalData reports.

Smitarani Tripathy, Influencer Analyst at GlobalData, observed that: “Global airlines are facing staffing shortage due to the implementation of the COVID-19 vaccine mandate, a necessary step according to the social media contributors to boost confidence among travellers amid the rise in travel demand on ease of travel restrictions.”

Tripathy continued: “Airline companies have taken varied approach for vaccination of their unvaccinated employees, including pay cut, increase in insurance premium, unpaid leave or termination. On other side, airlines companies are also offering bonuses to employees to avoid staffing shortages, a key underlying issue which is threatening to hinder the recovery.”

The top 5 are as follows:

Social media conversations also surged when the company reported better than expected sales for Q4 2020. Influencers have appreciated the company’s move as the partnership with JetSmart Airlines has the potential to meet customer demand with restart of travel.

Delta — 8,450 Mentions — A dramatic conversation spike among influencers around Delta was noticed when the company announced to take stricter measures by imposing a US$200 monthly surcharge on the company’s healthcare plan of employees who are not vaccinated against COVID-19. Influencers sees this as the latest tactic to cajole workers into having a COVID-19 jab.

Southwest — 6,900 Mentions — Southwest gained 46% growth in conversations following the cancellation of thousands of flights due to the protest of employees against vaccination mandate policy of the U.S. federal government.

British Airways — 5,700 Mentions — A sharp rise in social media conversations around British Airways was noticed when it restarted flight to its long-haul destination ‘New York’, as the US eased travel restrictions and reopened border for fully vaccinated international travellers after 18-months.

United Airlines — 5,200 Mentions — Conversations around United Airlines spiked up when the company became the first airline to mandate vaccination for their employees, after The US FDA gave full approval to the Pfizer-BioNTech COVID-19 vaccine in August.