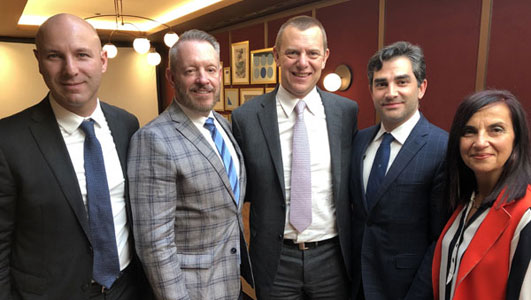 Alitalia officials hosted a celebratory trade luncheon yesterday (March 27) to update all that’s new at the airline and mark the new route, which begins three times weekly service on March 31, before going daily from June 2 to Sept. 28.

Nicola Bonacchi, vice-president of leisure sales and international markets, told those in attendance that Alitalia is coming off a good year with revenue up 7.1% and continuing to grow.

Speaking of the new Toronto service, Bonacchi said the airline’s strategy is to stay in Canada and work close with the trade. Service will be aboard an Airbus 330 configured in three classes of service – Magnifica (business class), Premium Economy and Economy – with flights providing convenient connections to the rest of Italy, Europe, the Middle East, Africa and Asia.

He noted that in 2018, Alitalia ranked second most punctual airline in Europe and eighth in the world with 83.2% of flights landing on schedule.

Bonacchi credited the airline’s growth in revenue during the last 15 months as a result of a new Commercial Policy, which is “more focused and responsive to travel agency needs.” Two new products launched include “Italy & Europe Pass” designed for passengers travelling from abroad and which can be used in conjunction with Alitalia’s “Rome Stopover” and “Discover Italy” products.

The airline also introduced new uniforms for flight and ground personnel, as well as a new and improved catering service with all menus prepared in the Italian tradition.

“We keep the Italian standard onboard. As soon as you get on to one of our planes you’re in Italy,” said Alitalia’s Giuseppe Careddu, country manager for the US and Canada.