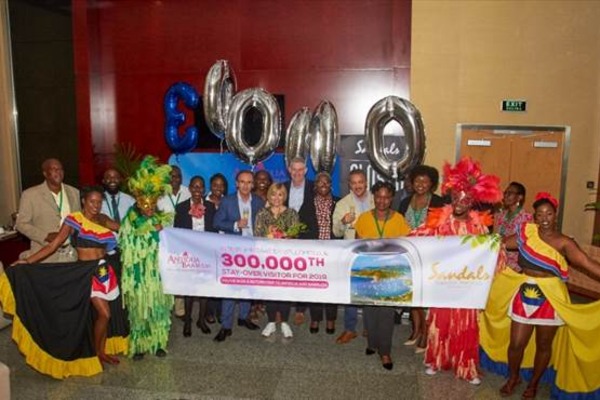 It was a festive afternoon, as cultural masqueraders, and dancers in colourful costumes, begun celebrating by partying on the band stand and greeting passengers in an extravagant cultural display complete with the sounds of melodious steelpan music.

Below in the airport’s VIP Lounge, Antigua and Barbuda’s Minister of Tourism, The Hon. Charles Fernandez, Minister of State in the Ministry of Tourism, Sen. Mary-Clare Hurst, Chairman of the Antigua and Barbuda Tourism Authority, Lorraine Raeburn, and other airport and tourism officials awaited the announcement that the record-breaking 300,000th visitor mark had been reached.

Laura and Ian Bowen, became the 300,000th and the 300,001st visitors when they arrived on a Virgin Atlantic Flight into Antigua from the United Kingdom.

As the couple stepped into the Arrivals Hall, tourism team members, and the cultural performers welcomed them and cheered congratulations.

In the VIP reception held for their arrival, the couple were presented with a free seven-night luxury hotel stay sponsored by Sandals Grande Antigua Resort and Spa along with return flights, a bouquet of tropical flowers and a gift basket filled with Antigua and Barbuda handmade treats and a bottle of the acclaimed 10-year old English Harbour Rum provided by the Antigua and Barbuda Tourism Authority.

During the reception, Antigua and Barbuda’s Minister of Tourism, the Honourable Charles Fernandez said: “We have seen incredible year over year growth every month this year so far. Almost every key market is seeing incredible growth – in particular the US, Caribbean, and the UK where our lovely couple hails from. These markets have all contributed to the double digit increase in stay-over air arrivals that we are celebrating this year.”

The Tourism Minister noted that November figures showed the largest monthly double-digit increase ever, with November this year at +31% higher than November last year with 29,908 stay-over arrivals.

Said the Minister: “At the end of November we had already exceeded our total arrivals reached in 2018. This represents a +14.9% increase year to date, and we were then only 25,000 shy of reaching the 300,000 visitor arrival milestone.”

In recognizing the 300,000 and 300,001 visitors, Minister Fernandez said: “This industry is about providing our visitors with a first class experience and so to our special guests of honour Mr. & Mrs. Bowen we say you could not have chosen a more romantic country for your holiday than Antigua and Barbuda and a more wonderful resort than the Internationally recognized Sandals Resort and Spa, which is the leading “couples only” resort on island.”

Sandals Grande Antigua Resort and Spa, general manager, Matthew Cornall, who was also present at the reception said: “On behalf of our Chairman and Founder, Mr. Gordon ‘Butch’ Stewart, we remain committed to the continued promotion of Antigua as an ideal vacation destination and are happy to note that the island’s 300,000th stop-over visitor is among our valued returning guests. It is our pleasure to join with the local tourism authority to mark this incredible milestone and we look forward to greater achievements together, as we work to create new milestones for the destination.”

For more on Antigua and Barbuda, go to www.visitantiguabarbuda.com .

Antigua and Barbuda Minister of Tourism, The Hon. Charles Fernandez joins with tourism officials and stakeholders to welcome the arrival of the 300,000th visitor Laura Bowen (c) with a celebration on the eve of the new year.