Home › Destinations › Arizona Takes To The Court In YVR

Arizona Takes To The Court In YVR 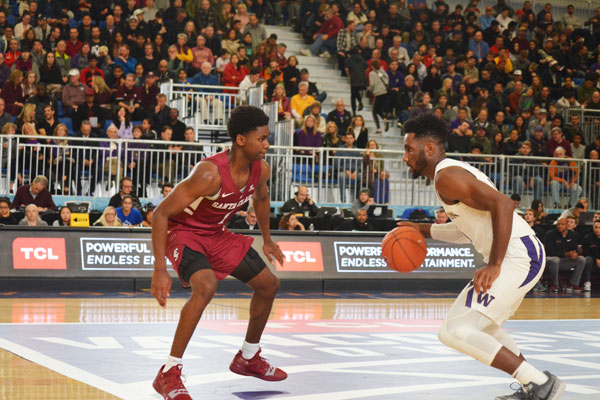 Four teams from the U.S.-based NCAA men’s college basketball ranks came to play in a tournament in Vancouver recently, and the Arizona Office of Tourism took the opportunity to participate. It was the first time that such a tournament has taken place in Vancouver.

Arizona tourism reps invited members of Vancouver’s travel media to the first two games of the Vancouver Showcase tournament, meeting them for drinks and appetizers before taking a short walk to the Vancouver Convention Centre for the games.

There, the college teams from the University of Washington and Santa Clara University took to an ad hoc basketball court with bleacher seating for an exciting tilt. It was followed by a game between Texas A&M and the University of Minnesota.

Arizona has a rich history of success in college basketball (University of Arizona) and the game is an extremely popular pastime for fans in the state. Hence the decision by Arizona tourism authorities to generate some interest in the sport with media north of the border, some 17 years after the Vancouver Grizzlies NBA team left town.