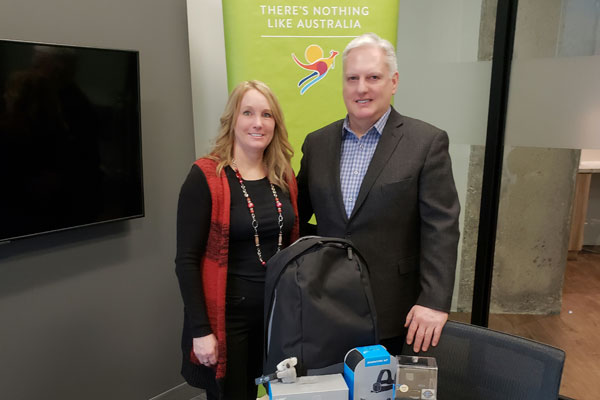 Marsha Ramage is going back to the land that inspired her love for travel.

The Wasaga Beach, Ont., Carlson Wagonlit travel agent is returning to Australia, a country she learned to love while touring it as a backpacker years ago, and which inspired her to enrol in a travel school.

Ramage was the winner of Tourism Australia’s Aussie Specialist (Canada) Ambassador Program contest – which saw video submissions from entrants – and which will see her and other winners from other parts of the world go on a March VIP fam trip.

Ramage says it will be impossible not to enjoy her upcoming trip.

“I just find Australia has everything you want in a vacation,” she continued, citing the likes of beaches and watersports, famed wines and Outback adventures.

“I’m looking forward to getting out and enhancing my knowledge of Australia and experiencing all the new things Australia has to offer,” adds Ramage, who specializes in selling the South Pacific.

The itinerary will take her to Victoria, where she’ll see such jaw-dropping landscapes as the Grampians and the Great Ocean Road, and enable her to learn about aboriginal culture and iconic Australian wildlife, such as the platypus. She’ll also visit Tasmania, experiencing its wines, cuisine and majestic coastline; and South Australia where her visit will include The Barossa, the heart of Australia’s wine country, and Kangaroo Island known for its abundant wildlife, secluded beaches and dramatic coastlines.

Ramage’s presentation was praised by Paul Larcher of Tourism Australia’s Toronto office, who said her “knowledge and her passion really came across well. We just felt she would be a really good ambassador for selling Australia.”

Jane Whitehead, Tourism Australia’s vice-president for the Americas, said the competition was a great success with a large increase in travel advisors becoming qualified Aussie Specialists during the campaign period, as well as a huge spike in engagement with Aussie Specialist content.

Further information about the Aussie Specialist Program is available at https://www.aussiespecilaist.com.

Ramage beat out four other finalists, all of whom were praised by Larcher as “outstanding.”

Meanwhile, Ramage says she’s looking forward to leaving Ontario’s snowy climes behind for a while this winter and heading to balmy Australia.