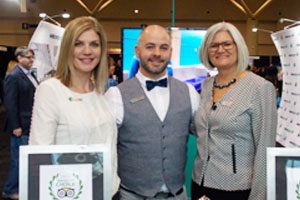 The Metro Toronto Convention Centre was abuzz last night as WestJet kicked off its 2017 Travel Trade Expos in Toronto, welcoming more than 400 agents who had a chance to meet with over 60 suppliers to learn all about what WestJet and WestJet Vacations has in store for them in the coming year.

And there’s lots to learn, whether you look at product for both the airline and the tour company, but also with all the changes that are going to be taking place at WestJet over the next five years as it sets a course to become the world’s “most caring” international airline.

(To find out more about WestJet’s Vision 2022 plan, check out the exclusive story in Canadian Travel Press, by clicking here ).

Oh, and by the end of 2017, if all goes according to plan, it will also launch a Ultra Low Cost Carrier (ULCC) – a move that will certainly shake things up in the Canadian air travel market.

“May is Travel Agent Appreciation month at WestJet and our Travel Trade Expos are the perfect way to kick off that celebration,” pointed out WestJet’s director, agency sales, Jane Clementino.

Clementino continued: “The Expos also give us an opportunity to interact face-to-face with our travel agents and suppliers across Canada. The feedback they share with us allows us to make enhancements to our existing products and services, and be even easier to do business with.”

And over the next few months, it will hold trade shows and presentations in over 20 cities across Canada for nearly 2,000 travel agents.

The new 2017-2018 WestJet Vacations brochure made its debut at the Toronto Travel Trade Expo, and travel agents were able to pick up copies at the event.

And agents can expect that there will be lots of excitement at the Montreal Travel Trade Expo (April 27) following the carrier’s blockbuster announcement of its increased service and new routes to and from Montreal and Quebec City.

For more on the Expos, go to http://www.WestJetTravelTradeExpos.com .