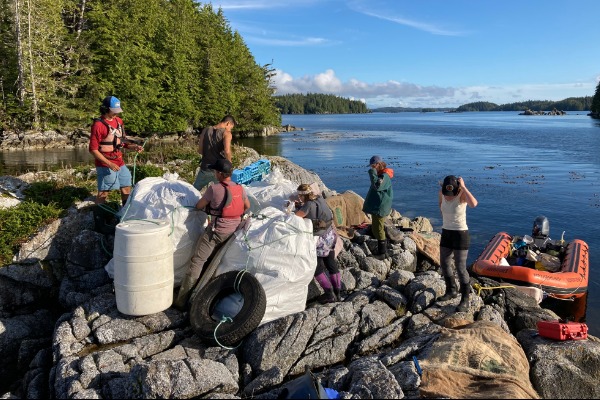 In mid-August, a fleet of tourism ships began an unprecedented, six-week expedition to the Great Bear Rainforest’s outer coast as part of the Marine Debris Removal Initiative (MDRI), a project funded by the provincial Ministry of Environment & Climate Change Strategy.

With the blessing from Indigenous leaders in the region, the expedition expects to remove between 75 and 100 tons of marine waste, including plastics, from up to 1,000 km of coastal beaches along the Great Bear Rainforest.

A group of BC small ship tour companies developed this innovative project in response to tourism shutdowns due to COVID-19.

Removing marine debris and plastics is a priority under the global Oceans Plastic Charter and the UN Sustainable Development Goals, to which Canada has committed. It’s a priority for Indigenous governments and communities, for sustaining ocean health and protecting community food harvest.

Doug Neasloss, stewardship director with the Kitasoo-Xai’Xais Nation, said of the initiative: “In these trying and uncertain times, the proposal and initiative from the SSTOA provides a rare opportunity and a good news story. Marine debris is an on-going challenge and a removal initiative of this scale — to clean up a large, remote coastline — is an undertaking that will provide significant environmental benefit to Kitasoo/Xai’Xais territory and beyond.”

The Great Bear Rainforest’s outer coast is strewn with reefs, and far from roads and communities, therefore clean-ups here are challenging. But the expedition tour companies have the skills and vessels to take on this rugged work, so, when COVID-19 shut down their season, the leaders decided to use their assets for the common good.

This initiative is being funded as part of the province’s COVID-19 stimulus funding and will provide needed work for 100+ crew and guides on nine ships, from five BC ecotourism companies. It will also employ a tug and barge and helicopter. In addition, a related in-shore clean-up done by members of Coastal First Nations communities will employ another 75 people.

Kevin Smith, CEO of Maple Leaf Adventures and co-lead on the project with Russell Markel of Outer Shores Expeditions, observed that: “When it became clear we would not be able to operate under normal circumstances this summer and had to cancel a sold-out season, we turned our attention to the environment to give back to the coast that sustains us.”

Smith continued: “We dreamed up an initiative for which there weren’t yet any dedicated resources. It’s been really rewarding to work with our colleagues on this, together as friends, not competitors. We also applaud the Wilderness Tourism Association, coast First Nations and the Province of BC for their support in helping clean up our oceans, a positive story for this unprecedented time.” 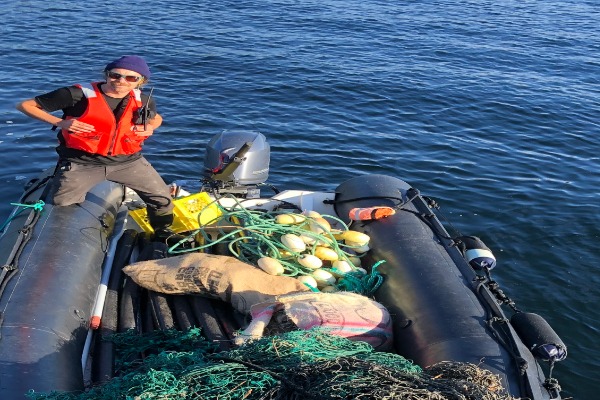 The crews, which include a number of scientists, are also collecting data on the debris they clean up, which they’ll provide to the Ministry of Environment & Climate Change Strategy.

Danielle Shaw, Chief Councillor for the Wuikinuxv Nation, explained: “Cleaning up plastic and garbage from beaches has been identified as a priority for our Nation and is critical to the long-term health of the marine environment in our territory.”

The project will be administered by the Wilderness Tourism Association of BC, of which the small ship tour companies are members.

Their group, the Small Ship Tour Operators Association (SSTOA), is composed of seven 100% Canadian owned and operated, small-ship-based travel companies that specialize in providing niche wilderness travel experiences for groups of 6 to 24 guests along the British Columbia coastline.

In particular, they operate in the Vancouver Island, Haida Gwaii, and Great Bear Rainforest regions. They have seen first-hand how marine debris can pile up on remote beaches only to be washed out into the ocean again during the next big storm, where they inevitably break down and become ocean micro-plastics.

B.C.’s Tourism, Arts and Culture Minister Lisa Beare noted that: “B.C.’s coastal environment is one of our greatest assets, attracting visitors from all over the world and supporting tourism in British Columbia.”

Beare continued: “Funding for these projects not only protects the marine environment, but provides jobs for people affected by the significant decrease in tourism as a result of the pandemic.”

Wilderness Tourism Association executive director, Scott Benton, will remain in Victoria to administer the MDRI expedition. Benton will also be supported by Katherine MacRae, Executive Director of the Commercial Bear Viewing Association, who has been instrumental in bringing this initiative to the government and the Tourism Industry Association of BC’s (TIABC) attention.

TIABC’s CEO Walt Judas said that: “Members of the SSTOA have pivoted to an innovative and reasonable idea that not only allows them to continue operating and employing skilled workers, but also provides a tremendous benefit to the province by cleaning up enormous amounts of harmful waste along the BC coastline that threatens marine wildlife, humans and the environment.”

The leaders behind the MRDI include:

These companies are internationally recognized, offering “Signature Canadian Experiences”, and have for decades worked closely with Coastal First Nations establishing protocol agreements in order to recognize Indigenous rights and title.  Three of the member companies have been awarded the Sustainable Tourism Award from the Tourism Industry Association of Canada