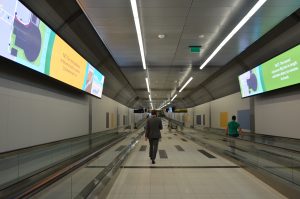 The pedestrian tunnel, which enables passengers to walk between the mainland and the airport, 100 feet beneath the surface of Lake Ontario, has delivered on its promise to improve convenience and efficiency at the airport by significantly improving passenger flow and reducing lineups both within the terminal and on the mainland.

Prior to the tunnel, passengers arrived at and departed from the airport in waves every 15 minutes according to the ferry schedule, causing choke points for travellers and surges in traffic demand at the mainland terminal and along Eireann Quay, the entrance road to the airport.

A recent study conducted by Dillon Consulting on behalf of PortsToronto found that more than 90% of travellers opt to take the free, convenient, six-minute walk through the tunnel. This change in access has resulted in a 75% decrease in vehicles queued northbound along Eireann Quay.

On average, 40% of travellers walk, bike or take transit to and from the airport – representing a significant number of the 2.5 million passengers (approximately 500,000 of which are connecting passengers) the airport now serves annually, further reducing congestion on surrounding roadways.