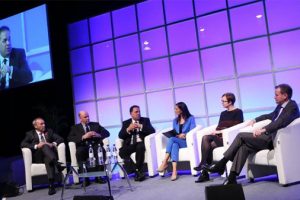 It was hardly surprising, given the London location, that Brexit issues dominated the first day of World Travel Market, reports Press Today’s Mike Dunbar from the show.

And there wasn’t anything positive to report concerning the UK’s decision to quit the European Union and its effect on travel.

For instance, some members of UK inbound – the trade association focusing solely on Britain’s inbound sector – have reported that more than 20% of their EU national employees have already left the UK “because of the long-term uncertainty over their status” and almost half of all respondents to a recent survey reported having difficulty recruiting EU staffers because of Brexit.

Moreover, research conducted for the British Hospitality Association warned there could be a shortfall of some one million workers after 10 years if EU migration is curtailed completely.

Both trade associations highlighted how crucial EU workers are to their members – particularly because of their language and service skills – and warned there are not enough British nationals with the right expertise to fill the looming gap.