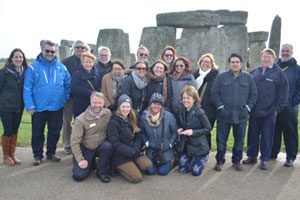 A group of Canadian tour operator reps attended the ExploreGB travel marketplace in Brighton recently, then took part in an intensive post-conference tour that covered many key attractions in southern England, reports Press Today’s Ted Davis who was on hand for the show.

Amongst them was Stonehenge, where the group stopped for a blustery visit to England’s mysterious prehistoric ring of stones, including the new visitor infrastructure there.

Over three and a half days, the tour also took in the Goodwood Motor Circuit, the D-Day Museum, Emirates Spinnaker Tower, the spectacular Mary Rose Museum, a tour of the HMS Victory, the Beaulieu Motor Museum, Palace House in the New Forest, Salisbury Cathedral, Stonehenge and the Bombay Sapphire Distillery — not to mention the musical “An American in Paris” in London.

Photo:
The group of Canadian tour operator reps on tour in Great Britain, following their attendance at the ExploreGB travel marketplace in Brighton.